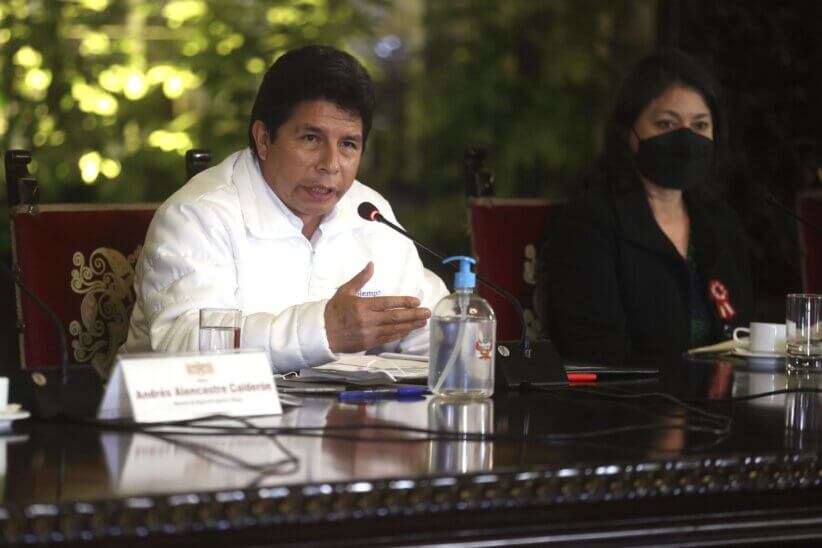 Peru’s Public Ministry opened a fifth investigation into President Pedro Castillo just days before the anniversary of his taking office.

According to the Public Ministry, the latest investigation is looking into possible interference by Mr. Castillo in the purchase of biodiesel in favor of a private company called Heaven Petroleum Operators (HPO).

At the end of 2021 it was made public that Mr. Castillo met in the presidential residence with HPO’s owner, Samir Abudayeh, and then-general manager of the state-owned oil company Petroperú, Hugo Chávez Arévalo.

Two weeks later, Mr. Abudayeh won a tender for USD $74 million with the Peruvian state, according to the “Panorama” television program.

Mr. Castillo is the first president in Peru’s history to be investigated while in office. He currently has five open investigations ranging from corruption and collusion to plagiarizing his master’s thesis.

Here’s a quick break down of each of the other pending investigations into the president:

On July 21, the Public Ministry opened an investigation into the president for obstructing justice related to his removal of former Minister of the Interior Mariano González two days prior.

Investigators are looking into whether the minister’s removal was related to his formation of a special police unit tasked with hunting fugitives associated with Mr. Castillo, including his nephew Fray Vásquez, former Minister of Transport and Communications Juan Silva and former presidential secretary Bruno Pacheco, who are under investigation for alleged corruption in the Ministry of Transport and Communications.

On May 29, the Public Ministry announced that Mr. Castillo was included in an investigation into Mr. Silva along with six congressmen from the Acción Popular political party.

The officials are accused of being part of a criminal organization within the Ministry of Transport and Communications that benefited from alleged corruption related to awarding public works contracts to Peruvian and Chinese construction companies for the construction of the Tarata bridge in north-central Peru.

The Public Ministry opened an investigation on November 11, 2021 into Defense Minister Walter Ayala, and Mr. Pacheco, for allegedly pressuring the heads of the Army and the Air Force to favor the promotion of certain officers.

In July 2022, Attorney General Benavides announced that she had included President Castillo in the investigation, alleging that he headed the group that intervened in the irregular promotions of military personnel.

In early May, the Public Ministry opened an investigation into whether President Castillo and his wife, Lilia Paredes, plagiarized over half of their master’s thesis a decade ago while attending César Vallejo University (UCV).

The investigation came after a report on TV news program “Panorama” that Mr. Castillo, 52, had plagiarized 54% of a 121-page thesis that he wrote together with his wife in 2012.