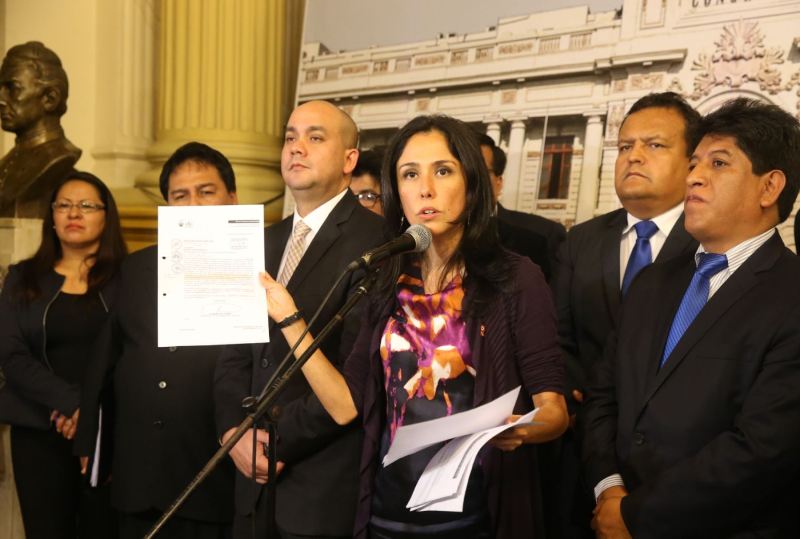 Upon arriving at congress flanked by Nationalist Party congressmen, Heredia requested the Belaunde Commission hearing be public. However the committee voted along party lines to maintain a closed hearing.

“I came here to tell the truth, that I have nothing to do with Martin Belaunde’s irregular contracts,” Heredia told reporters after testifying. “I am convinced they have only chosen to investigate me so they could lift my bank account secrecy.”

However the scandal of the day stemmed from a question which Heredia believed implied a romantic affair with Rodrigo Arosemana, the former general manager of Antalsis, a company linked to Martin Belaunde.

The spat sparked a war of words in the press. Former Lima mayor Susana Villaran came to Heredia’s defense in saying congress and the press in Peru were treating Heredia with “cruelty.”

Heredia engaged in an argument via Twitter with El Comercio journalist Patricia del Rio, who defended Perez. Del Rio wrote in her column that Perez phrased the question carefully in order to respect Heredia’s privacy, but that she had to ask it as it was relevant to the investigation.

“[Heredia’s] mistake is in confusing the legislative arena with the judicial arena … Here nobody is accused. We are looking for the truth,” said commission chair Marisol Perez.

Yesterday the first lady’s brother, Ilan Heredia testified before the Belaunde commission. He denied having any role in Belaunde’s acquisition of government contracts in regions throughout Peru.

The commission is investigating Martin Belaunde for various corruption and political racketeering operations in his Antalsis and Todograph companies, as well as his political donations to the Peruvian Nationalist Party and consulting jobs he procured for Heredia in the years before her husband was elected President.