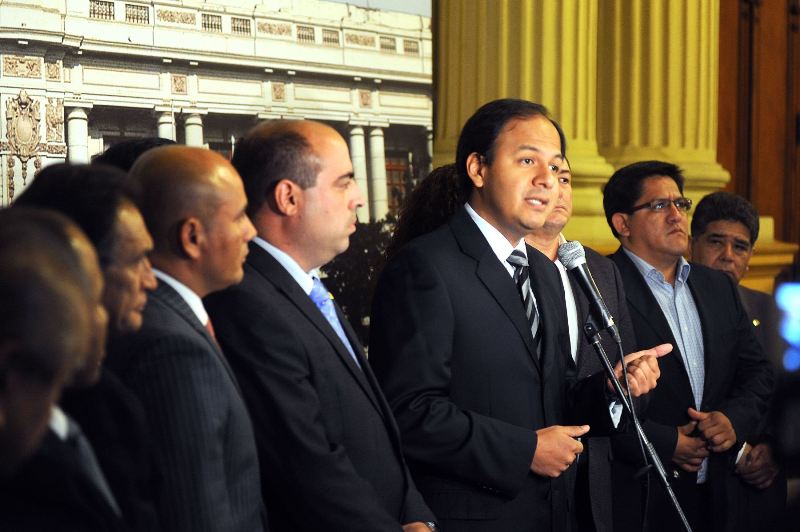 Belaunde was arrested today in Bolivia’s Beni state near the Brazilian border. According to Bolivia’s new interior minister Carlos Romero, Belaunde “did not have a scratch.” Belaunde told Peruvian media by phone that he had not escaped from the La Paz home where he was serving house arrest, but that he had been kidnapped. Belaunde faces extradition to Peru for embezzlement and money laundering.

“This does not just have a political responsibility, but criminal as well. This falls on minister Adrianzen, who should face impeachment,” Medina told El Comercio. “Belaunde’s escape is an embarrassment for Peru and undoubtedly weakens the government and the institutions fighting against corruption.”

There was widespread questioning of President Ollanta Humala’s government for not jailing Belaunde while he was under investigation, which subsequently allowed Belaunde to flee Peru via the Desaguadero border to Bolivia last December after charges were filed against him for embezzlement and money laundering. However Gustavo Adrianzen only assumed office at the justice ministry during Humala’s latest cabinet shakeup in April, when Belaunde was already under house arrest in Bolivia and had been denied political asylum.

The impeachment case will rest on whether Adrianzen did enough to compel the Bolivian government to jail Belaunde, for which congressmen will scrutinize the justice minister’s communications with Bolivia in requesting Belaunde’s extradition. The right-wing fujimorista coalition alleges that Humala’s government did not aggressively pursue Belaunde because of the fugitive’s close ties with the President, first lady Nadine Heredia and their Peruvian Nationalist Party.

“A Bolivian government minister resigned and a police chief was dismissed. There is no political culpability here [in Peru] because the ministers acted with diligence,” said prime minister Pedro Cateriano. “All the ministers involved have the confidence of the President … I say again, the government made every effort in its reach to realize the extradition.”

After being reviewed by an impeachment subcommittee, Medina’s measure will be voted on by congress.