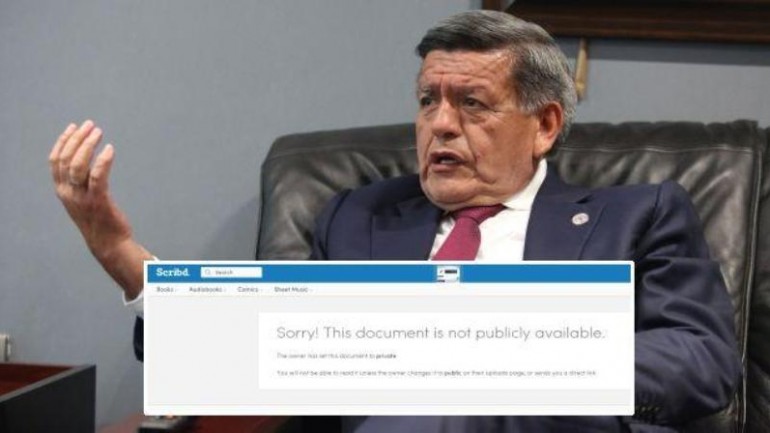 The Complutense University of Madrid is investigating alleged plagiarism in the doctoral thesis of Peru presidential candidate Cesar Acuña.

After a Twitter user pointed out Acuña’s doctoral thesis contained identical texts from other publications on Monday, various media outlets have applied a plagiarism-detecting software to the 359-page document titled “Teacher competence and student achievement at the private university in Peru” which was published in 2009.

El Comercio found paragraphs and even entire pages from Acuña’s thesis which are identical to previously published documents from at least eight institutions including the World Health Organization, the University of Chile and the University of Barcelona.

“The opening of this investigation, a common practice in this institution, looks to verify if the core principle of the Complutense to require original works in a doctoral thesis has been violated,” university spokeswoman Maria Martinez told El Comercio. “It will be rigorous and it will protect the principles of good academics that govern [the university’s] activities throughout its long trajectory.”

If its investigation finds that Acuña had committed plagiarism, the university could revoke his PhD in education with an emphasis in “Research, diagnosis and evaluation in the educational intervention.”

Acuña has not responded to the allegations since the scandal developed throughout Tuesday and the newspapers reports came out Wednesday morning. The candidate has removed the thesis from his Scribd account.

“When someone describes social or economic issues, it coincides with other books. It is natural. If I describe the geography of Peru, it will be the same as all the theses from Peru,” Virgilio Acuña, brother of Cesar Acuña and Alliance for Progress congressional candidate, told El Comercio.

Cesar Acuña is the founder and owner of Cesar Vallejo University, which has campuses throughout Peru. Despite his background in academia, the politician rankled the ranks of educators when he said in a speech at the 2013 Lima book fair that he does not read or write.