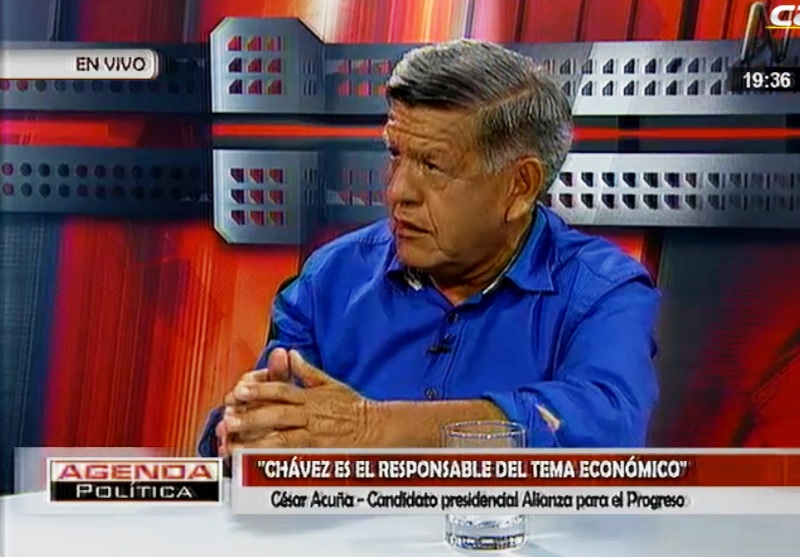 In an interview on Canal N’s Agenda Politica, Acuña said that the state should act to stop the increase in prices of food, gas and utilities. He also said that the central bank should set the exchange rate of Peru’s sol against the dollar.

“We have to control [prices] because the people are overwhelmed to see that there is one price today and another tomorrow,” Acuña said. “There is the Peruvian state. Prices must be controlled.”

Annual inflation in Peru rose to 4.4% in December, up from 4% in November, a percentage point above the central bank’s target range of 1% to 3%. The central bank has cited temporary factors such as the rising dollar and the El Niño climate phenomenon’s effect on food harvests as driving inflation, which officials believe will fall within the target range when the dollar stabilizes in 2016.

“There must be a regulator for the exchange rate, which is where it is because of the great mistake of having just one market for our exports, which is China,” Acuña said in reference to the sol’s decline against the dollar.

Acuña also emphasized that he would be a business-friendly candidate in mentioning an upcoming meeting with Peru’s chamber of commerce, CONFIEP.

“That business leaders should trust another businessman,” the owner and founder of Cesar Vallejo University and the Trujillo soccer club said. “Business leaders should know that the Peruvian entrepreneur is the natural ally of Acuña, because investment is required to move the country forward.”