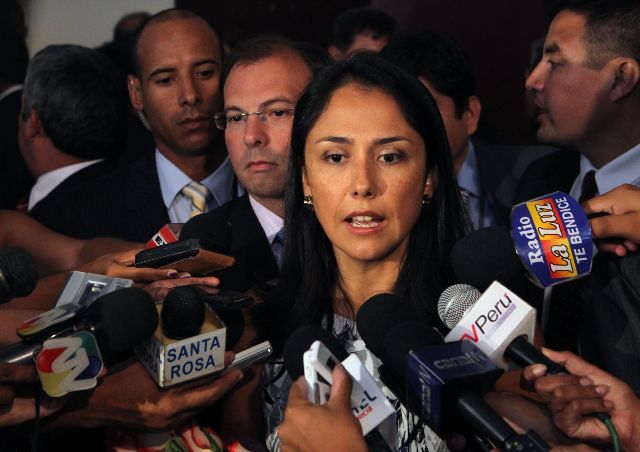 Heredia’s lawyer Anibal Quiroga announced that Heredia is considering a lawsuit against media company Acciones and has taken legal action in an attempt to close the attorney general’s investigation into suspicious movements of money. Quiroga said defending Heredia is impossible in the face of violations to Heredia’s fundamental rights.

Last week Jorge Paredes, a former consultant to Nationalist Party congressman Daniel Abugattas, provided documents to the attorney general showing deposits of $215,000 to the personal bank account of Nadine Heredia. Paredes confirmed that Todo Graph made payments to the Nationalist Party and claimed that the company was used to launder money from campaign donations.

Other documents showed the people who made deposits in Heredia’s accounts were donors to the Nationalist Party 2006 campaign or party employees who would not have the financial resources to contribute so much money.

Accusations of money laundering intensified when Cuarto Poder uncovered a notarized document signed by Gastañadui that Nadine Heredia is the true owner of Todo Graph.

Peru is currently requesting extradition from Bolivia of Todo Graph founder Martin Belaunde for his alleged involvement in the La Centralita and Antalsis embezzlement scandals.

Other irregularities surrounding Heredia include deposits into the Nationalist Party account from the Cusco state government after Jorge Acurio won the gubernatorial election there. The Nationalist Party treasurer at that time was Nadine Heredia’s father, Angel Heredia. Nadine Heredia’s mother, Antonia Alarcon, is also under investigation for the 2014 acquisition of a house in Surco for $400.

Quiroga insists there has been no crime committed as to the origin of any of the deposits.

President Ollanta Humala’s approval rating fell to 22% this month. Approval for Nadine Heredia, who had previously been rumored to be considering a presidential run after her husband’s term, fell to 16%.