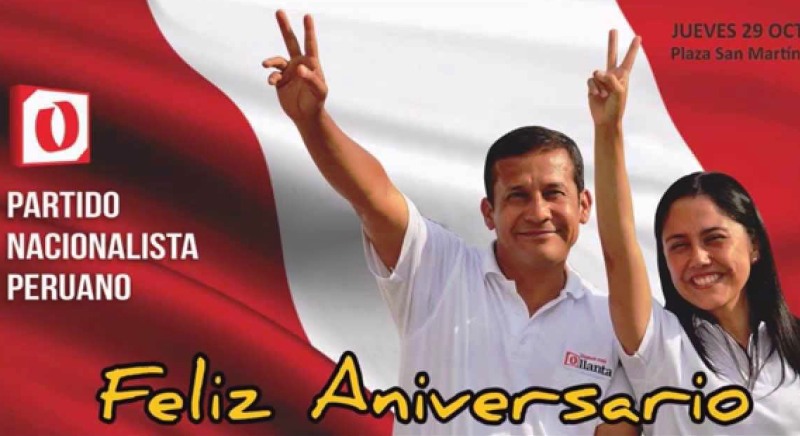 The party of President Ollanta Humala and first lady Nadine Heredia is suffering an existential crisis of mass defections.

Last week Daniel Urresti, the Peruvian Nationalist Party’s presidential candidate before withdrawing from 2016 elections, resigned from the party while publishing a biting criticism of party president Nadine Heredia on his Facebook page.

“Dear beloved nationalists (which many have ceased to be), we should stubbornly persevere in the belief that it is possible to achieve a democratic party, where a decision is not imposed from one person who only needs a look in her eyes for the five or six signatures of subservient and prostituted lackeys to allow the will of one to be imposed over tens of thousands,” Urresti wrote on his Facebook page in reference to Heredia’s alleged dominance over the direction of the party.

Urresti told reporters that while he was leaving the Nationalist Party, he would remain a nationalist at heart. Soon after Urresti resigned, prominent Nationalist Party congressman Daniel Abugattas implied that he was out of the party as well.

“It is impossible to continue in the party,” Abugattas told Exitosa. “I’m completely isolated. I don’t think a resignation is necessary … The word ‘resign’ isn’t applicable to an organization that is falling apart.”

Congressman Johnny Cardenas, who was seeking reelection in his home state of Junin, also resigned from the party while publicly criticizing the withdrawal from 2016 elections. The party’s national committee withdrew its presidential and congressional candidates out of fear the party would not garner the minimum 5% of the vote required to remain a registered political party. Some local party offices demanded the resignation of Humala and Heredia, the party’s founders, in the wake of the decision.

The Peruvian Nationalist Party is a shell of what it was in 2011, when it won the presidency and 47 of Peru’s 130-seat Congress. Today, over half of those legislators have defected, including both vice presidents, as well as the party’s presidential candidate for 2016.

“I will have to consolidate the party, to reboot the party. It cost us a lot of effort to form a government,” Humala told an Arequipa television station. “I will continue in politics. I’m not going to hang up the gloves.”

However it is not clear if the party can recover from its losses of the last five years. The desertions did not come all at once, but steadily over time as party members saw Humala govern in ways they saw as at odds with the party’s populist principles. Specific flashpoints which prompted party resignations include the government’s backing of the controversial mining projects such as Conga and Tia Maria, its licensing of oil block 192 to a private company and the money-laundering charges facing Nadine Heredia.