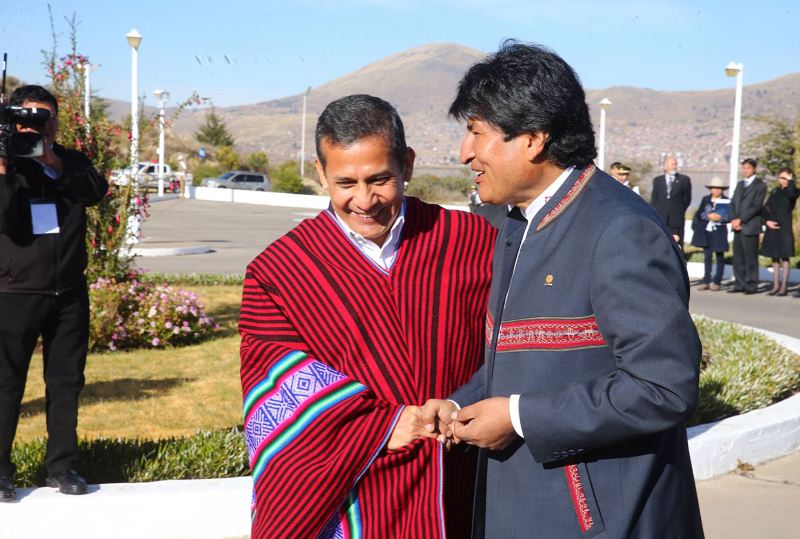 In what they called the countries’ first “bi-national cabinet,” the two heads of state and their cabinets met in what they said will become regular collaboration between the governments of countries who conduct annual trade worth $1.2 billion.

“A revolutionary greeting to brother President Humala” Morales said in Puno at the beginning of the meetings. “Peru and Bolivia have a shared history of great battles, rebellions and revolts, a permanent battle for the liberation of our peoples. We come here confident of integration and liberation.”

Humala cited “the great project” of Andres de Santa Cruz, the 19th-century President of the short-lived union between Peru and Bolivia which was attacked and broken up by Argentina and Chile. “Peru and Bolivia are people from the same nucleus. We belong to the same culture and history,” Humala said. “We maintain customs and celebrations, our people are integrated.”

One agreement reached will create a commission to design a plan to decontaminate and improve the biological diversity of Lake Titicaca. In addition to the lake, the two governments agreed to work together to better manage the environment in the Maure-Mauri and Desaguadero river basins.

Another deal would increase collaboration in combating drug trafficking, money laundering, corruption and illegal mining. In addition to those illicit industries, a separate initiative will target illegal markets for cultural heritage artifacts.

The most important negotiation may have concerned regional highways and infrastructure projects to facilitate the export of Bolivian natural gas through Peru’s southern port of Ilo to markets in Asia and on the Pacific Coast of North America. The leaders signed a deal for Bolivia’s state-owned gas firm YPFB to increase its export shipments to Peru.

“There is a commitment from our state firm, which is going to export to the southern cities of Peru. It’s going to distribute liquefied natural gas and liquefied petroleum gas. These tasks are being moved forward between the two governments,” Morales said.

The meeting came as Bolivia and Chile await The Hague’s judgment on a territorial dispute concerning sovereign access to the sea. If The Hague rules in favor of Chile, Peru will be Bolivia’s only option to send its natural gas west.

The meeting comes just after Bolivia extradited fugitive Martin Belaunde to Peru after serving a lengthy sentence under house arrest, during which he briefly escaped inside Bolivia.

The two countries’ national soccer teams will play in a Copa America quarterfinals match in Chile on Thursday.