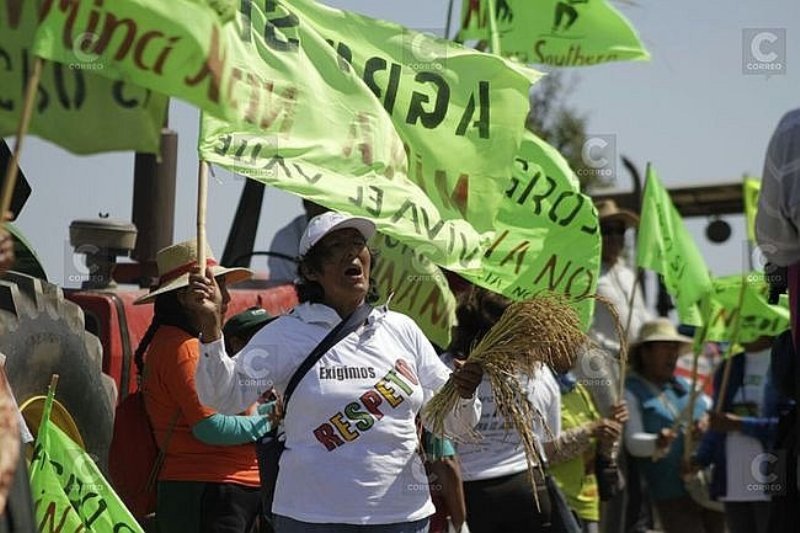 The protests in Puno’s city of Juliaca and Arequipa’s Islay province come from opposite ends of the political spectrum in terms of mining and the environment. In Puno informal miners marched to demand the repeal of President Ollanta Humala’s reforms aimed to end informal mining. In Arequipa, a crowd of mostly agricultural workers protest to reject the construction of the Tia Maria copper mine.

Informal workers from the La Rinconada and Lunar de Oro gold-mining settlements in Puno’s San Antonio de Putina province blocked all five highways which access Juliaca for several hours on Tuesday. They are demanding the repeal of Decrees 1100 and 1105 as well as the resignation of environment minister Manuel Pulgar-Vidal.

The protest in Puno comes after presidential candidate Keiko Fujimori vowed to repeal both decrees and design a new program to compel informal miners to register with the government. Fujimori met with miners in La Rinconada last March, and announced her pledge to repeal the reforms with economist Hernando de Soto in Ica last week. Fujimori says the reforms have failed to formalize small-scale mining.

In Arequipa, residents of Islay province began a three-day protest in opposition to the planned $1.4 billion Tia Maria copper mine on Wednesday. Broad Front congressman-elect Justiniano Apaza led hundreds of protesters to march from the Dean Valdivia district to Cocachacra.

Community leaders from the violent protests against Tia Maria in 2015 did not accompany the march due to court orders restricting them from participating in protests. Anti-mining activist Jesus Cornejo told Correo that the march was organized spontaneously after National Society of Mining, Petroleum and Energy (SNMPE) director Jose Miguel Morales told Peru’s state media on May 5 that Tia Maria is “practically ready.”

Following Morales’s comments, Southern Copper president Oscar Gonzales would look to begin construction of the mine during Humala’s government and that local opposition had diminished.

“We will insist in these two months left in Ollanta Humala’s government. We believe the project should move forward for the benefit of everybody – workers, the people, district, province, country and the company,” Gonzales said.

Both protests in Puno and Arequipa illustrate the increasingly difficult political landscape of the mining sector which drives Peru’s economy. The conflicts have pushed issues such as how to gain control over informal mining as well as balance the interests of local populations with large-scale mining to the forefront of 2016 elections.