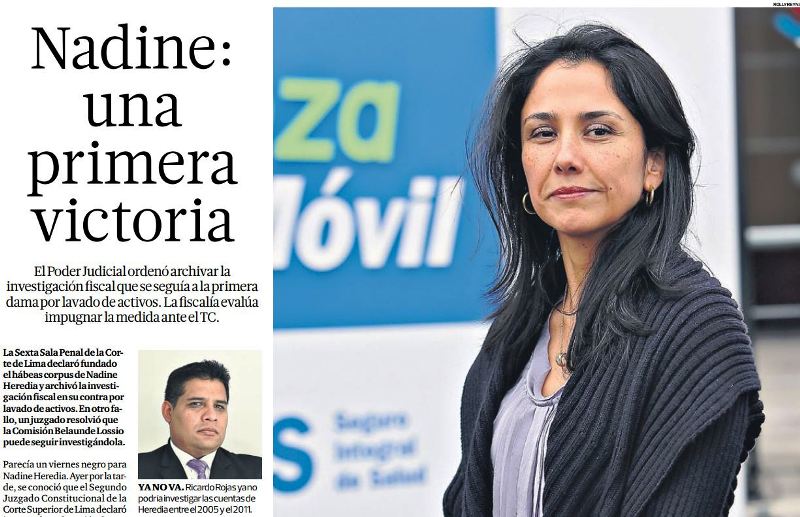 In February Heredia filed a writ of habeas corpus to end investigations into alleged money laundering concerning her interests in Todo Graph, a company founded by jailed influence-peddler Martin Belaunde, as well as donations to the Peruvian Nationalist Party.

The judge granted Heredia’s appeal Friday night and ordered the closure of investigations into the first lady, citing the prosecutor’s failure to show probable cause that a specific crime was committed.

“This verdict is a disgrace,” said APRA spokesman and member of the Belaunde commission, Mauricio Mulder. “It proves a person can receive money from obscure sources and nothing happens.”

District attorney Ricardo Rojas has said he will appeal the decision to Peru’s supreme court.

The legal victory for Heredia came hours after a defeat when a different Lima court denied a similar motion to remove the first lady from a congressional investigation into government corruption surrounding Belaunde, who was extradited from Bolivia in May.

“Although there are clearly irrelevant elements in the congressional commission’s work documents, such as a travel itinerary,” reads the judge’s ruling, “there is also circumstantial evidence, such as the alleged ownership of [Todo Graph], which justify the commission to [continue its investigation].”

“We will present an appeal against that decision so it’s looked at a second time,” said Heredia’s lawyer, Roy Gates. “The truth is that the habeas corpus ordering the closure of unduly reopened investigation covers the facts the Belaunde commission has taken into account to include Nadine Heredia in its investigations.”

While Heredia and her lawyers will continue to take legal measures to remove her from the Belaunde commission’s investigations, they celebrated the dismissal of money laundering charges Friday night.

“There cannot be persecutions that have political overtones on the verge of an election campaign,” said President Ollanta Humala. “This has been a firm, final judgment. It is clear the issue is over, finished.”

The congressional commission headed by Marisol Perez will continue to investigate Heredia’s links to Martin Belaunde and alleged payments he funneled to the first lady over ghost consulting contracts.

Fugitive military commander turns himself in after 13 years