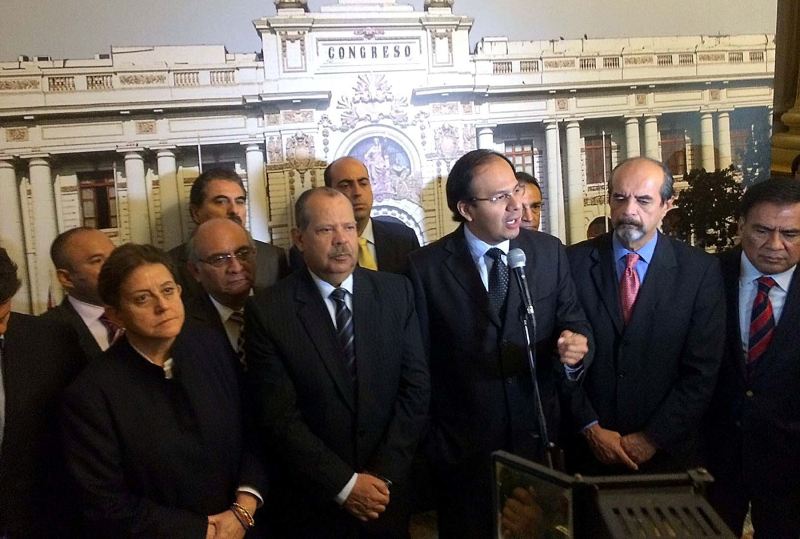 Peru’s largest two political parties broke quorum by walking out of congress yesterday ahead of a key vote to give the government limited powers to rule by decree.

The dispute began when Fujimorista congresswoman Martha Chavez of the Popular Strength party proposed a debate to expel the twice-suspended congressman Alejandro Yovera. The Popular Strength party expelled Yovera after his second suspension due to fraudulent loans he allegedly withdrew in the name of his employees. Yovera was suspended from the party but has remained a member of congress who now caucuses with President Ollanta Humala’s Peruvian Nationalist Party.

Because a congressional commission could not reach consensus whether to recommend Yovera’s expulsion, Nationalist Party congresswoman and congressional speaker Ana Maria Solorzano denied Chavez’s motion from going to the floor. Chavez began shouting at Solorzano, calling her “Isla’s lady” in reference to Solorzano’s alleged boyfriend and fellow Nationalist Party congressman Victor Isla. Order broke down when Nationalist Party speaker Daniel Abugattas began shouting at Chavez in defense of Solorzano. The Fujimorista and APRA parties then walked out of congress, breaking quorum.

The Fujimorista and APRA parties allege that the Peruvian Nationalist Party is protecting Yovera to retain an extra vote in congress. The dispute came just before a planned vote in which Humala’s government would request limited powers to rule by decree in matters of the economy and crime. Humala’s government, one of the least popular in Latin America, will continue its term as a lame duck without the decree faculties.

The opposition parties boycotted congress again this morning to prevent quorum from being reached. Both sides want a vote on Yovera’s future before the decree powers debate.

Prime minister Pedro Cateriano, who appeared at congress to make the case for decree powers, criticized what he called a partisan boycott. “We want to get over these problems with democratic dialogue and not the congressional boycott today which the government has been a victim of because of the opposition.”

“We the opposition are here, we’re not going anywhere. We’re going to have the phone line open and we’ll be here to continue the conversation,” APRA spokesman Mauricio Mulder said.