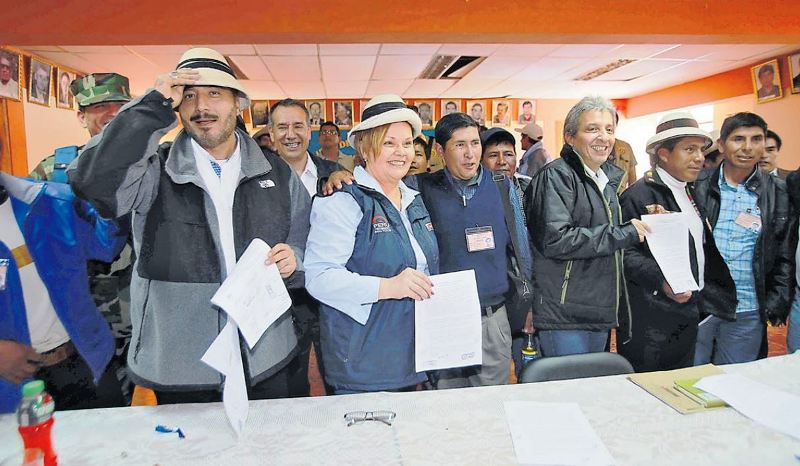 Peru’s government has reached an agreement with community leaders from southern Peru to end a strike against the Las Bambas copper mine project.

A delegation from Peru’s government including Cabinet ministers and other officials reached an agreement with community leaders in Apurimac state yesterday to end an indefinite strike against the $10 billion mine.

“We welcome the lifting of the strike and that this region of the country can return to normal,” President Ollanta Humala said. “We should rejoice when agreements are reached through dialogue. It is essential. Democracy thrives when consensus is achieved based on dialogue.”

The government will lift the state of emergency, progressively withdrawing police from the region, given the strike ends. Protesters cannot block roads or occupy the MMG Limited camp.

The housing ministry agreed to provide a house to each family of the three protesters killed in protests. The government will also ensure the men’s children are enrolled in social welfare programs.

The health ministry will assume the healthcare costs for the dozens of protesters who were injured.

Finally, officials from Peru’s mining and energy ministry will hold “information workshops” throughout October in the Cotabambas province to explain the changes to the environmental impact study, including the inclusion of a controversial molybdenum plant.

“They have assured us they have no opposition to mining. There is no anti-mining element,” Ortiz said after the agreement was announced.

In fact, the city of Challhuahuacho grew from 500 to 15,000 residents in the last three years due to local investment. A portion of the population felt business fall to nothing at their new hotels and restaurants catering to mineworkers, and truck drivers who stood to gain from the transport of minerals also saw their incomes threatened by the protests.

“We represent a province which is betting on development right now,” said Cotabambas mayor Odilon Huanaco.

The Las Bambas copper mine is projected to produce 500,000 tons in each of its first 10 years. It will be the world’s second-largest copper mine by 2017 and account for over a third of Peru’s copper production. The mine will employ 2,000 workers directly and pay $400 million in annual taxes.