Peru: Kuczynski calls for protest to save mining company 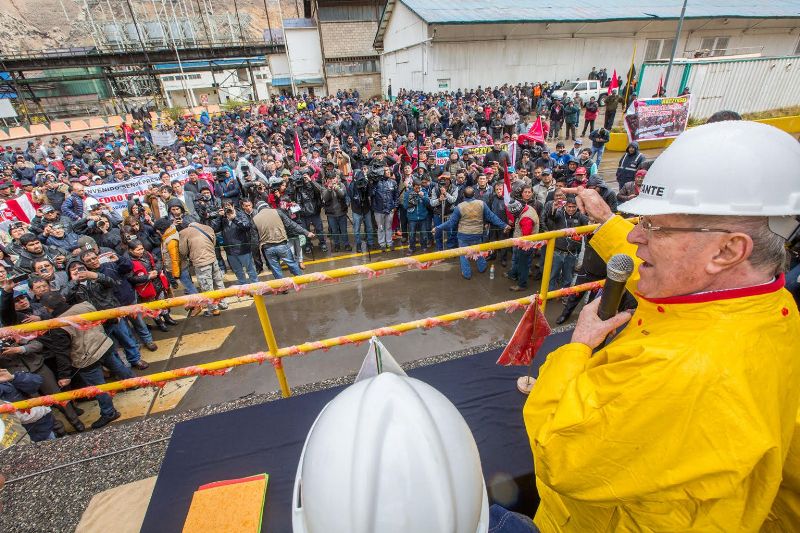 President-elect Pedro Pablo Kuczynski has called for mineworkers at Doe Run’s smelter in La Oroya, Junin to march on Congress to extend its liquidation proceedings.

Kuczynski visited La Oroya on Wednesday in one of his first trips since winning Peru’s presidential runoff election on June 5. Kuczynski won the Yauli province of Junin state by comfortable margins in both the first and second rounds of voting.

Kuczynski toured the La Oroya smelter, which has been in complicated bankruptcy proceedings since 2009. There he called on mineworkers to “march on Congress” to demand an extension to a liquidation proceeding which could cost the rural region 2,500 jobs.

“You have my word that I’ll do my best to [keep the smelter open] … You help me with Congress and I’ll help you to get this going,” Kuczysnki told hundreds of mineworkers at the La Oroya smelter. “You all know who controls Congress. Let’s march so they don’t let La Oroya die!”

Doe Run declared bankruptcy in 2009 when it could not get credit to buy concentrates during the financial crisis. Three different firms have taken control of bankruptcy proceedings in an attempt to keep the Cobriza copper mine and La Oroya smelter running, but international mining companies have shunned the troubled operations in one of the world’s most polluted cities.

A PwC report in 2014 valued the La Oroya assets at $175 million given low commodity prices and Peru’s tight labor laws and environmental standards. The company also has $600 million in liabilities, more than half of which are owed to the government for environmental damages and fines.

When Doe Run’s assets received no bids in an auction last year, the managing company moved toward a piecemeal liquidation by closing the Cobriza copper mine which accounts for 75% of Doe Run’s value and pays the smelter workers’ salaries.

Local mineworkers called an indefinite strike that resulted in violent protests which left one dead and over 60 injured. The government under President Ollanta Humala granted a one-year extension for the liquidation proceedings, which are set to expire on Aug. 27.

If no companies step up to purchase Doe Run’s assets, creditors could again force Cobriza’s closing just one month into Kuczynski’s government.

Kuczynski’s calls for a march drew criticism from across the political spectrum. His comments were widely seen as an attack on his presidential opponent Keiko Fujimori’s party, Popular Force, which took 73 of the chamber’s 130 seats.

“The comments aren’t appropriate for the president,” Popular Force spokesman Pedro Spadaro told El Comercio. “We are concerned that a president-elect ready to take office would make these announcements. Marches do not solve problems.”

Keiko Fujimori visited Junin’s provincial capital of Huancayo during the runoff campaign, where she vowed to keep the smelter open. Some analysts doubt Popular Force would oppose buying more time for a managed liquidation to save jobs.

“The majority in Congress is stuck between a rock and a hard place,” writes Mirko Lauer in La Republica. “If they extend [the liquidation], they give Kuczynski his first political victory. If they put off a decision, they’ll face the fire from the La Oroya workers.”

Kuczynski denies he is picking a fight with Popular Force. He says his government needs more time to find a solution for the complicated problem in making the La Oroya smelter viable for a private company.

“This is a call to all the branches of government who have turned their backs on these people for years and now tell us we have a few weeks to fix the problem,” Kuczynski told Andina. “It is not a violent march. It is just going to ask Congress how they can leave us with a law that expires on Aug. 27 when we take power on July 28. We have four weeks to fix a problem that nobody touched for eight years.”

Workers have asked that the government relax environmental standards to make the 96-year-old smelter more attractive to potential buyers, a proposal the environmental ministry has rejected. La Oroya is one of three areas in Peru which are allowed higher sulfur-dioxide emission limits to accommodate mining operations, but they are still three times stricter than Chile’s limits.