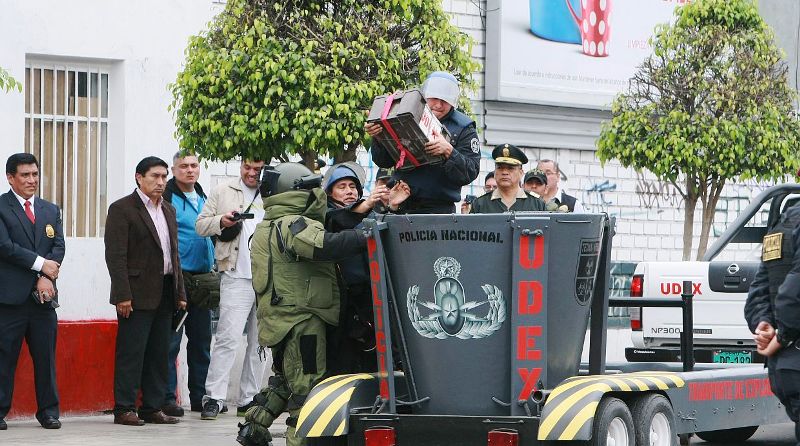 Lima police arrested a top distributor of grenades and Peru’s army has ordered all soldiers to barracks to account for grenades and other weapons.

Peru’s defense and interior ministries are working together to dismantle the illegal organizations which sell grenades on the black market. The crackdown comes days after a Lima police officer was killed by a grenade left in front of a school in Villa El Salvador, one of several grenade attacks by extortion gangs to make crime headlines this year.

Yesterday police arrested former police officer Edmundo Mamani in his Breña home where the bomb squad found 51 grenades packaged in cases of four. The sting started with an undercover agent who purchased a grenade from Mamani for $90.

Police seized two more grenades from a presumed associate of Mamani who operated from a storefront on Avenida Argentina in downtown Lima. Interior minister Jose Luis Perez called Mamani “one of the largest grenade distributors for criminals.”

Meanwhile, Peru’s army commander ordered all Lima-based soldiers remain quartered in their barracks for an inventory of equipment. However defense minister Jakke Valakivi said it was not likely the grenades used by extortion gangs come from Peru’s military because all the units undergo monthly inventory counts.

“It’s unlikely that the grenades used by criminals would be from the military because in an armed institution, there are continuous controls,” said general Roberto Chiabra. “Those grenades probably came from the borders.”

The two grenades seized in downtown Lima sparked a political war of words after it was learned the business the grenades were sold from displayed a Popular Strength banner with an image of presidential candidate Keiko Fujimori.

Interior minister Perez, who raised the idea of prosecuting grenade attacks under terrorism statutes, said that the police is pursuing leads on grenade-trafficking organizations in Lima.

“We already have evidence of who is distributing grenades to these people,” Perez said. “We are tracing the steps of the suppliers.”