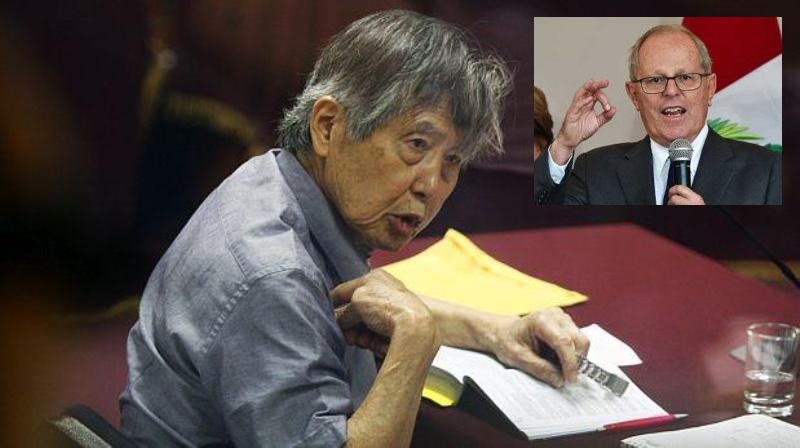 Peru President-elect Pedro Pablo Kuczynski has said he will reject Alberto Fujimori’s request to pardon his prison sentence of 25 years for crimes against humanity.

Fujimori officially submitted a request for pardon to Peru’s justice ministry on Friday, his second request since President Ollanta Humala denied a similar request in 2013. Fujimori has been imprisoned since 2007, serving 25 years for corruption and crimes against humanity.

“He has the right to request [a pardon], but I won’t sign it,” Kuczynski told reporters. “My position has not changed. If Congress passes a law for those accused of these kinds of crimes and who have reached a certain age, they can finish their sentences at home.”

Officials in Humala’s government have indicated that the next government will rule on Fujimori’s government. The application is currently being reviewed by a pardons commission within the justice ministry, which will issue a legal opinion to the president in the coming weeks. President-elect Kuczynski assumes office on Thursday.

Fujimori’s request comes just as Kuczynski’s government is poised to head the executive branch which must work with a Congress controlled by the former president’s daughter, Keiko Fujimori. Fujimori’s Popular Force party took 73 of the legislature’s 130 seats in the first-round vote. Kuczynski narrowly defeated Fujimori for president in a runoff vote on June 5.

Some analysts speculated that Kuczynski might reach a deal with Popular Force in which he would pardon Alberto Fujimori in exchange for congressional support for his initiatives. Kuczynski will seek decree powers from Congress to fast-track legislation aimed at propping up Peru’s slowing economy. Popular Force and Peruvians for Change leaders have denied such a deal.

“Personally, we can be in favor or against the pardon, but this issue does not figure into the political agenda of the party,” Popular Force congressman Luis Galarreta told RPP.

“There is a sector in Fujimorismo that apparently wants to put pressure on us to pardon Fujimori in exchange for decree powers,” Peruvians for Change spokesman Carlos Bruce told El Comercio. “But official Popular Force spokesman [Luis Galarreta] has said the pardon issue is not on his agenda and we have no reason not to believe him.”

Some legal analysts argue that Peru’s Constitution prohibits pardoning crimes against humanity. They say the only route to pardon Fujimori would be for health reasons.

While Kuczynski ruled out a full pardon, he has left the door open for allowing Alberto Fujimori to return home for health reasons or old age if the new Congress passes such a law.

Hundreds of protesters marched in downtown Lima on Friday night to call for the release of Alberto Fujimori. While the former president who dissolved Congress in 1992 is accused of stealing over $100 million and ordering extrajudicial killings, he is also seen as the president who defeated the Shining Path insurgency restored growth amid an economic crisis.