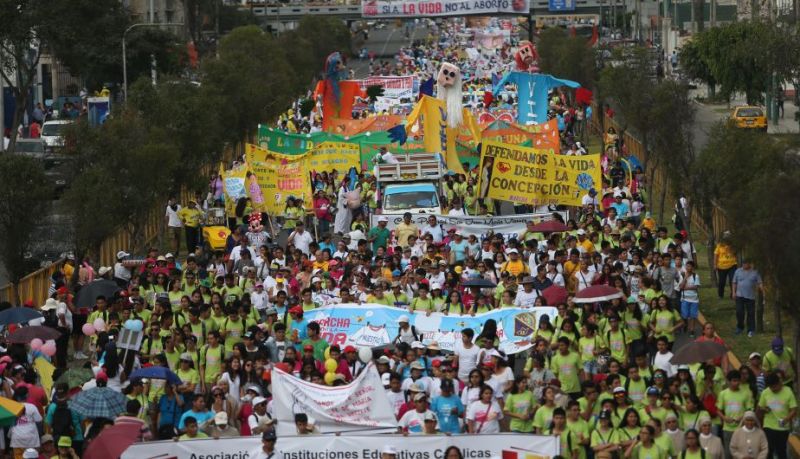 Lima closed two of its main avenues to accommodate tens of thousands of demonstrators in the annual March for Life protest on Saturday.

The pro-life march started at the intersection of Brasil and Javier Prado avenues in Magdalena and continued south on Brasil toward the Costa Verde along the Lima coastline, where the March for Life chapter of Lima held a rally featuring live music and guest speakers including Lima archbishop Juan Cipriani.

“Let’s ask God to protect the family, to protect the woman who for some reason was weak and fell into the tragedy of abortion,” Cipriani said before the crowd. “Because we have to forgive, but we cannot let them say that abortion is a right. It is not a right, it is murder.”

The March for Life chapter in Lima claimed that 750,000 people attended the march and rally. News agency RPP put the number at 60,000. Some Catholic organizations call Lima’s March for Life the largest protest in Latin America.

The size and scale of the annual march illustrates the influence of the Catholic Church in this deeply conservative country. Of the top five presidential candidates, Pedro Pablo Kuczynski, Alfredo Barnechea and Veronika Mendoza support legalizing abortion in case of rape.

Even the left-wing Mendoza does not propose to legalize abortion in cases beyond rape. One of the speakers at Saturday’s rally became pregnant after being raped when she was only 12 years old, but refused to abort.

However the annual demonstration was not completely without controversy. Ricardo Moran, the openly homosexual co-host of the “I Am” reality television show, tweeted criticisms of the march.

“Tomorrow is when the homophobes and those who cannot stay out of others’ lives march?” Moran tweeted.