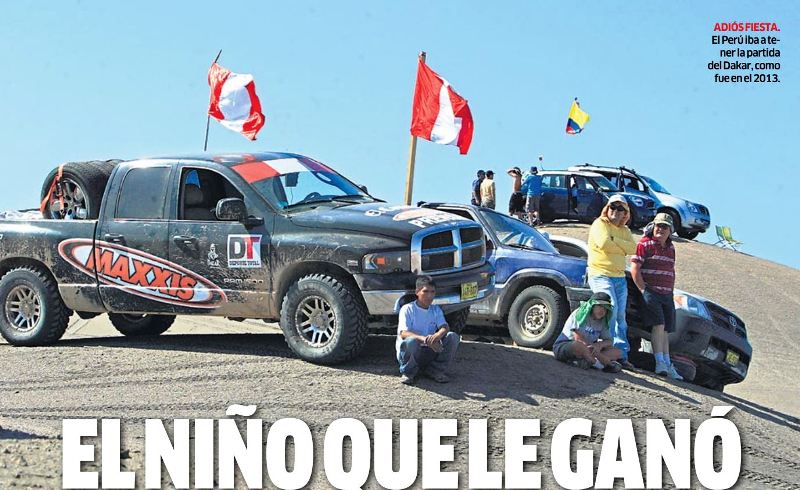 Peru’s government has cancelled its participation in Dakar Rally events in 2015 and 2016 due to concerns about extreme weather conditions caused by El Niño.

Peru’s tourism ministry announced the decision yesterday, two weeks before the country was set to host the Inca Challenge, an off-road race starting in Lima and ending in the deserts of Ica. Peru has also cancelled its participation in the 2016 rally.

“Given the impact that the El Niño phenomenon may have in different areas of the country and, in anticipation of the effects on the population as a consequence, it has been decided to cancel our participation in the 2015 Dakar Series and 2016 Dakar Rally motor sport events,” reads the statement from Peru’s tourism ministry.

Events scheduled for September and January will be rerouted to include only Argentina and Bolivia.

Weather experts have forecasted a strong El Niño starting this December. Earlier this year torrential rains and landslides killed dozens and destroyed thousands of homes, while ocean swells damaged hundreds of homes and infrastructure along the coast.

The government has allocated $79 million for projects to help mitigate the damage of the weather phenomenon in which warm surface temperatures of the Pacific Ocean causes increased rainfall and anomaly ocean swells.

Extreme weather conditions caused by El Niño in the summer months at the end of 1997 and beginning of 1998 are estimated to have cost the Peruvian economy $3.5 billion.

The Dakar Rally is an annual off-road race spanning several days and thousands of miles. Initially held in north Africa’s Sahara desert, the race was moved to South America in 2009 due to security concerns. However it retained the name of Dakar, after the Senegal capital where the race traditionally ended.