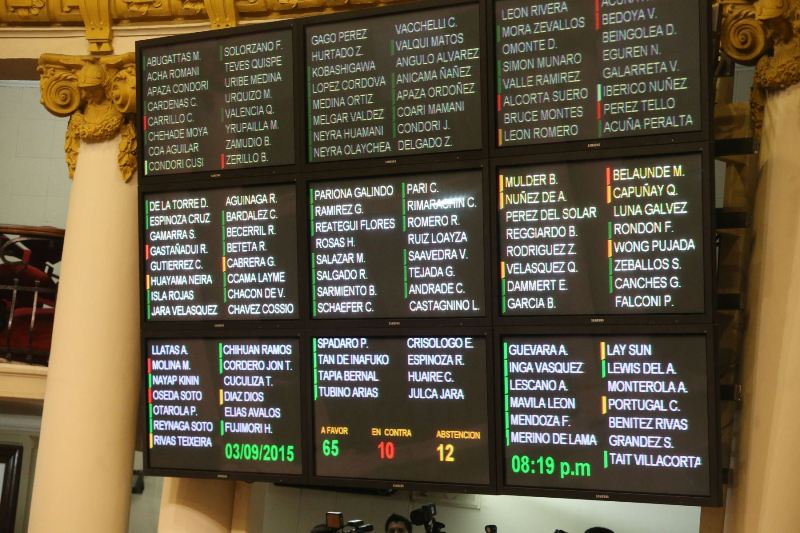 The law which was written specifically to get around previous legislation prohibiting Petroperu from taking on new debt during the $3 billion Talara refinery modernization was approved with 71 votes in favor, 10 opposed and 12 abstentions.

“I accept [this vote] with great maturity and humility. I call on the President, who has a chance to make a claim for Peru and the people of Loreto,” said Loreto governor Fernando Melendez, who participated in regional strikes in Iquitos to protest the awarding of block 192 to private firm Pacific Stratus Energy.

The text of the law authorizes state oil regulator Perupetro, which had already finalized a two-year contract and turned over operation of the block to Pacific Stratus, to draft a new contract authorizing Petroperu to operate the oil block.

While the initiative enjoys support in congress and there were widespread celebrations in the streets of Iquitos last night, officials in President Ollanta Humala’s government as well as business community leaders have criticized the vote as a populist move to appease protesters.

“Adoption of the act would be a horrible message to send to investors in general because it violates the constitution,” mining and energy minister Rosa Ortiz said. “The opinion of the [congressional mining and energy] commission did not take into account the current realistic situation of Petroperu, a company that has just begun the process of consolidation and is in a financial restructuring for the Talara refinery modernization project.”

Having passed congress, the law must be signed by President Ollanta Humala, who has 15 days to render a decision.

At this point it is not clear if Humala will approve the law and, if he does, how the government will get out of its current contract with Pacific Stratus Energy, a subsidiary of Pacific Exploration and Production, the Canadian firm formerly known as Pacific Rubiales.

“Congress cannot change a contract with a simple vote,” said presidential candidate Pedro Pablo Kuczynski. “What is legally required must be addressed for Petroperu to participate as a minority partner, but with all the responsibilities. It has to put up its his share of the investment, etc.”

The regional government of Loreto has seen its royalties-dependent revenue plummet as production at block 192, formerly known as block 1AB, has fallen from 50,000 barrels per day 20 years ago to just 10,000 barrels today. The price of oil has also fallen by 60% in the last year.

The indigenous populations which live in the Amazon jungle territories say that the block’s previous operator, Argentine firm Pluspetrol, caused environmental contamination. Both regional interests believe that the state oil firm would be more responsive to the public.

Petroperu, which has focused on refining since surviving a wave of state-firm privatizations in the 1990s, has not produced oil in over 20 years.