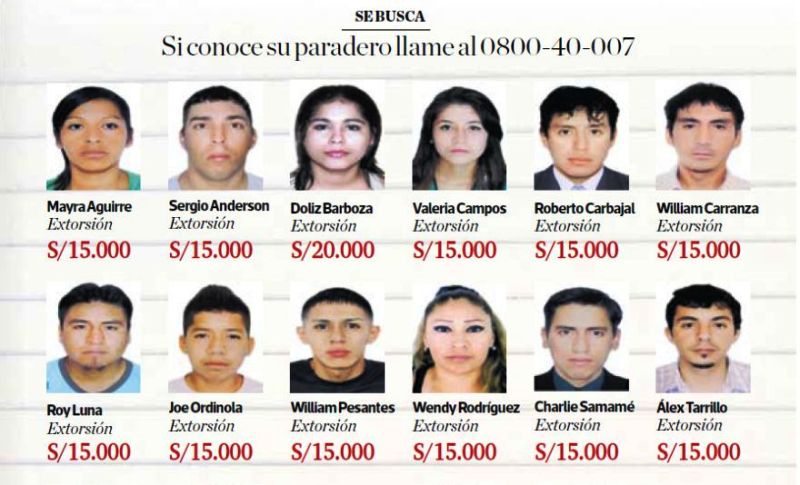 The expansion of Peru’s rewards program has led to the arrests of six of Peru’s most-wanted fugitives in less than two weeks.

Peru’s interior ministry announced today that the leader of an extortion gang was arrested in Sullana, Piura last night. Police located Joe Ordinola in a Sullana shantytown after receiving a tip from an anonymous source looking to collect the interior ministry’s $4,500 reward for information leading to his capture.

Ordinola was the fifth fugitive captured under Peru’s rewards scheme since the interior ministry expanded the list to 119 fugitives on Aug. 8. Ordinola was one of the list’s 20 fugitives wanted for extortion. Others on the list are wanted for murder, rape, armed robbery, drug trafficking, money laundering, embezzlement and corruption. The rewards range from $3,000 to $21,000.

“Let’s have criminals be afraid of good citizens, and not just us afraid of them,” interior minister Carlos Basombrio told El Comercio. “The aim is to put a price on the arrest of not only gang leaders and terrorists but also the neighborhood thieves, drug dealers and rapists who are wanted. Everybody with an arrest warrant will progressively acquire a reward for his arrest.”

On Monday Chilean police handed over Aryton Casahuaman, an alleged murderer-for-hire suspected in the assassination of a district mayor in Ancash. The day before another informant earned $3,000 for turning in alleged burglar Luis Arrunategui in Piura.

Last week police in Chimbote received a tip which led to the arrest of Carlos Martinez, a gang leader wanted for murder with a reward for $7,500. His arrest followed the capture in downtown Lima of an alleged member of an extortion gang, which would pay out $3,000.

The rewards scheme began under former President Ollanta Humala and his interior minister Jose Luis Perez. The program was enacted by decree after a wave of high-profile grenade attacks and assassinations of local politicians by extortion gangs.

The first list published last March featured 15 fugitives, of which seven have been caught. A second list of 15 was published on June 1, and six more were arrested.

On July 28, President Pedro Pablo Kuczynski’s new government took office after winning an election in which crime was voters’ top concern. Kuczynski and Basombrio immediately increased the budget to $380,000 in rewards and expanded the list of fugitives five-fold to over 100 alleged criminals.

Basombrio’s department created a special website for the program where visitors can download a PDF file featuring all 119 fugitives’ names, photos and rewards. The program’s hotline guarantees anonymity to informants with a special code to claim the reward. The interior ministry also created the hashtag, #QueEllosSeCuiden, or “They better be careful.”

“[These arrests are] a sign that the program works and it should continue,” Basombrio said. “We are committed to expanding the program and we hope to have more than 500 fugitives on the list by the end of the year. And in the long term all dangerous fugitives will be included so citizens can cooperate with their arrests.”