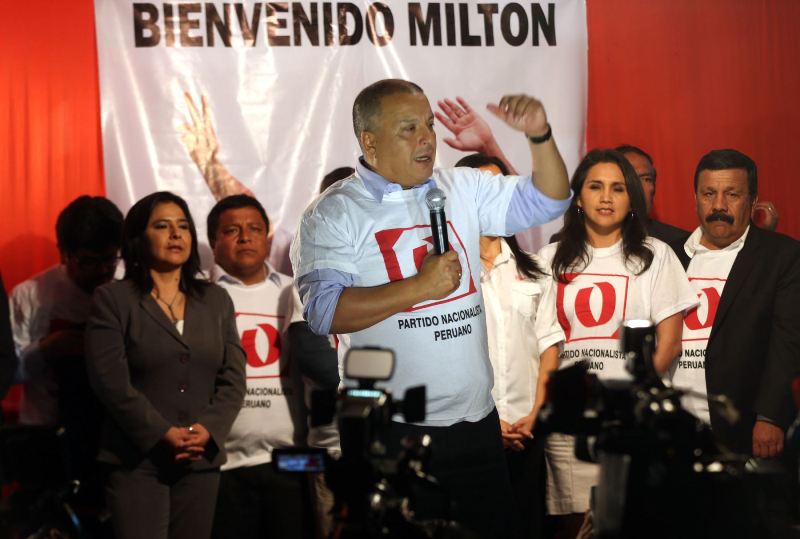 The scandal-courting former interior minister Daniel Urresti renounced his bid for the presidency in 2016 elections and declared his support for the new Peruvian Nationalist Party candidate, Milton von Hesse.

While Urresti is a much more recognized politician than Von Hesse, analysts believe the switch was inspired by the former’s current murder trial for the military’s 1988 execution of journalist Hugo Bustios. Earlier this month a witness accused Urresti of rape in a trial which looks like it will become too embarrassing to be compatible with a successful presidential campaign. The latest Ipsos poll reported voters intending to vote for Urresti fell to 2% from a high of 6% in April.

The anointing of von Hesse was not a complete surprise after he resigned from his post last Sunday, the last day for public officials looking to run for president to resign their current offices. Yesterday the party of President Ollanta Humala presented von Hesse as its official candidate in 2016.

“[Von Hesse] understands the [political] terrain, but he also has technical knowledge,” said first lady and president of the Peruvian Nationalist Party Nadine Heredia. “I’ve seen it, members of Congress have seen it, how he has worked side by side with the president, not at a desk but traveling and feeling the reality of our people.”

Von Hesse enjoyed the current government’s highest approval rating and was the longest surviving minister in a Cabinet which has been perpetually shuffled during Humala’s rocky term. A trained economist, von Hesse worked for Peru’s finance ministry under three different governments and designed this year’s rent-to-own and leasing laws which look to drive the construction and real estate industries in Peru’s slowing economy.

“I bought into the idea of inclusion understood as the people’s right to have a level playing field in life,” von Hesse told El Comercio. “If you did not have proper food as a child, you could not get a quality education. If there was no drinking water at home, how can you compete with me, when I had everything? That comes first.”

Von Hesse also rejected the idea of sending Peru’s military to patrol city streets. With crime being voters’ top concern heading into this election, several candidates have called for the army to support the police in deterring crime. Von Hesse said that changing institutions is the only way to combat citizen insecurity.

The latest opinion polls put approval for Humala and Heredia at 14% and 12% respectively, their lowest since the start of the president’s term. Humala has implemented many policies at odds with his populist campaign pledges, which has alienated his base. But most analysts attribute the unpopularity of the “presidential couple” to increasingly damning reports of corruption and money laundering investigations into the first lady.

The Nationalist Party has suffered mass defections which include both vice presidents and have left its congressional coalition at half its size since the beginning of Humala’s term. Yesterday Apurimac congressman Jhon Reynaga also quit the party, citing the government’s lack of follow-up after its negotiations to end protests against the Las Bambas copper mine.

“The fight in this election is going to be hard,” Heredia said. “But with nationalism and this group we have we will continue fighting for Peru’s continued to growth.”

Investigator jailed for slander against former governor in Peru