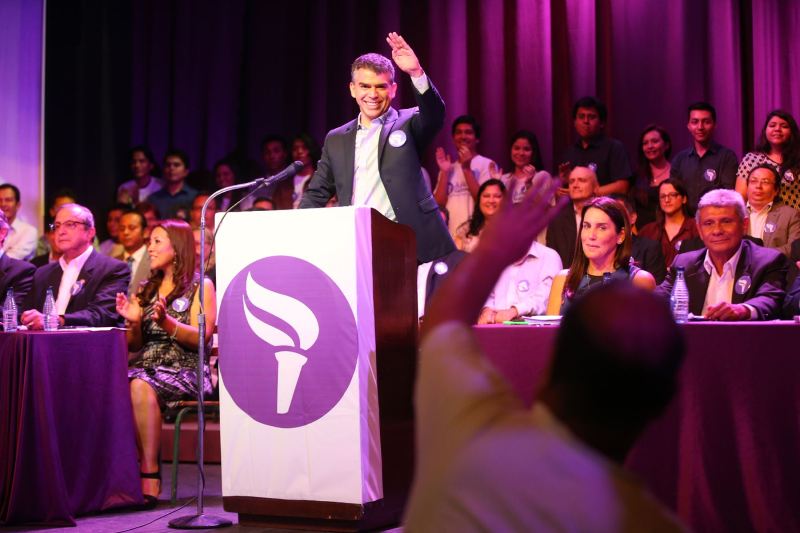 According to the GfK poll taken last week, Fujimori leads the field with 32.6% of voters. But this poll’s surprise lies in the ascent of 45-year-old economist, Julio Guzman. After shocking Peru’s political scene by emerging among the top five candidates less than three weeks ago, Guzman has overtaken Cesar Acuña and Pedro Pablo Kuczynski for second place with 10.4% of voter support.

Acuña and Kuczynski garner 10% and 9.5% of voter intentions respectively. After factoring in the 2.47% margin for error, all three candidates are in a statistical tie for second place. However the surveys were completed before reports surfaced of alleged plagiarism in Acuña’s doctoral thesis. It is unclear if or how much the scandal will erode support for the self-branded candidate for education.

“We are rising because people are sick and tired, the same reason I have,” Guzman said at a campaign event. “I got into politics because I’m sick and tired, and because I got tired of complaining. Most Peruvians feel the same way.”

Guzman added that his government would better tackle corruption, citing Brazilian investigators who uncovered bribery and kickbacks in the Carwash scandal as a model to emulate.

The poll also tried to gauge voters’ disillusion with politics in Peru. Respondents were asked about their enthusiasm for elections and whether they would prefer young or experienced candidates. While less than half cited satisfaction in exercising their right to vote, a full 43% said they only vote to avoid the state fine under Peru’s obligatory voting laws.

A majority of voters prefer a president with little to no experience in politics. While only 35% claimed to want a president with experience, 56% said they would vote for somebody new. Guzman seems to have displaced Acuña as the “outsider” candidate. More than 80% of his supporters said they wanted to see somebody new, while 74.6% of Acuña’s supporters said the same.

Forty-one percent of voters still do not know who Guzman is.

Keiko Fujimori’s solid grip on a third of the electorate was again confirmed in the survey, indicating the daughter of former President Alberto Fujimori will compete with the second-place candidate in a runoff vote. When asked about her father’s presidency, 66% of respondents told GFK that Alberto Fujimori oversaw the best government in modern times.

Keiko Fujimori has continued to distance herself from her father, who is serving 25 years in prison for ordering the summary executions of suspected rebels in the La Cantuta and Barrios Altos massacres. “In no way would I have closed Congress,” Fujimori said in an interview published in El Comercio’s Sunday edition, referring to her father’s “self coup” in which he dissolved the legislature.