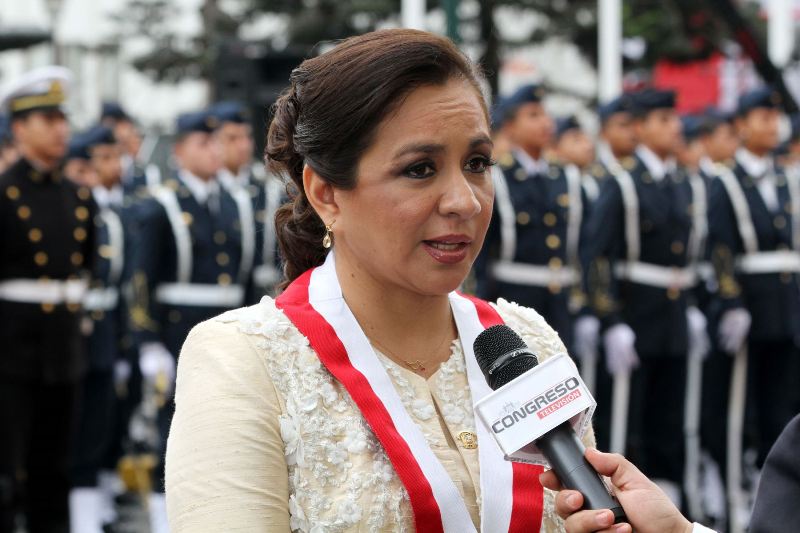 Espinoza sent her resignation letter to Peruvian Nationalist Party president and first lady Nadine Heredia last month, but the news was only made public on Friday, two days before the deadline for Espinoza to join a different political party for 2016 elections.

Espinoza’s “painful” yet “irrevocable” decision leaves President Ollanta Humala’s ruling party with just 30 members of congress, down over 40% from 47 when he took office. Espinoza’s departure is the latest sign of discontent and factional squabbling in the Peruvian Nationalist Party.

Congressional leader Luis Iberico said the resignation came as no surprise to legislators and that Espinoza and the Government Palace had belonged to “different political parties” for some time. Former Nationalist Party congressman Omar Chehade, who resigned the second vice presidency in 2012 and left the party earlier this month, attributed Espinoza’s departure to Nadine Heredia’s management of the party.

“They prevented [Espinoza’s] nomination for the presidency of Congress. They followed and mistreated her via intelligence agents,” Chehade said, referring to the Nationalist Party’s passing over Espinoza for the congressional presidency election this year and last, as well as a domestic spying scandal which targeted political figures including members of the government’s ruling party.

“That’s why she wrote in her resignation letter how ‘painful’ it was,” Chehade said, adding that Nadine Heredia was an antagonist in Espinoza’s political career.

The resignation of the highest-level official to date comes when the president’s approval rating is at an all-time low and the first lady is increasingly mired in money laundering investigations which only seem to grow more incriminating.

Heredia’s involvement with jailed influence peddler Martin Belaunde, the Venezuelan government under Hugo Chavez and suspicious campaign finances have tainted the Peruvian Nationalist Party with an image of corruption.

But as Heredia battles in court to stay out of jail, the most damaging element of Espinoza’s resignation may have been her comments implying that the Nationalist Party does not stand for the populist principles it was founded on.

In other words, Humala’s business-friendly policies could play a role in more departures from the party in following high-profile politicians like Sergio Tejada, Veronika Mendoza, Natalie Condori and Justiniano Apaza to left-wing parties including the Broad Front and Dignity and Democracy.

“As president of the party, [Nadine Heredia] must listen to her critics, not be so inaccessible and respect each one of her legislators,” said Isaac Humala, father of President Ollanta Humala. “She should not be so arrogant in treating her people.”

The Peruvian Nationalist Party was founded 10 years ago by Humala and Heredia for the 2006 elections. A recent survey of Peru’s election board showed the party still had the second highest number of registered members after the right-wing Popular Christian Party led by Raul Castro.

75% of Peruvians in favor of the military patrolling city streets