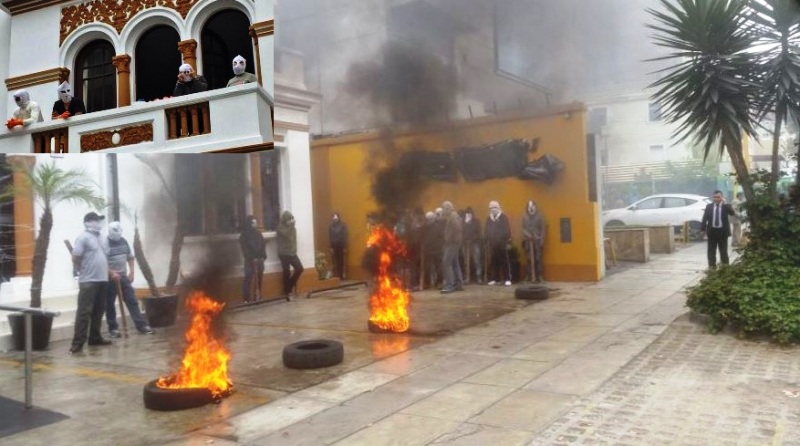 Thirty-six hired thugs staged a standoff against Lima police in an effort to prevent the taking possession of a Miraflores hotel.

The gang entrenched themselves in the Ferre Colonial hotel in Lima’s main tourist district of Miraflores early Monday morning. They burned tires on the sidewalk and threatened to detonate propane gas tanks in front of the hotel whose 33 rooms rent for $70 per night between Parque Kennedy and the Larcomar shopping mall.

After a two-hour standoff, police arrested 35 men and one woman who were allegedly hired by the property renter to avoid eviction. Hotel operator Jorge Pelaez faced eviction for not paying rent in over two years, which had accumulated to over $450,000.

In a strange twist, building owner Elizabeth Palomino is the wife of Vicente Diaz, a businessman linked to jailed mafia boss Rodolfo Orellana. Diaz and Palomino are accused of having defrauded property owners in the Gamarra garment district and having them evicted. Orellana ran a property fraud network so powerful that former interior minister Daniel Urresti called him “the biggest mafioso of Peru.”

Yesterday’s standoff comes less than three months after two high-profile home invasions in Lima. In the first, 52 men occupied a Lince home in a suspected case of retribution from a local gas company against a former employee. Less than 24 hours later, a gang of 30 usurped a home in Breña before escaping. Police believe the former homeowner tried to take possession of the property after selling it.

El Comercio reports that if a gang can successfully thwart efforts to evict occupiers from a property, it can take up to 12 months to mount a second eviction effort. As of the end of August, Peru’s police received over 1,700 reports of home invasions.