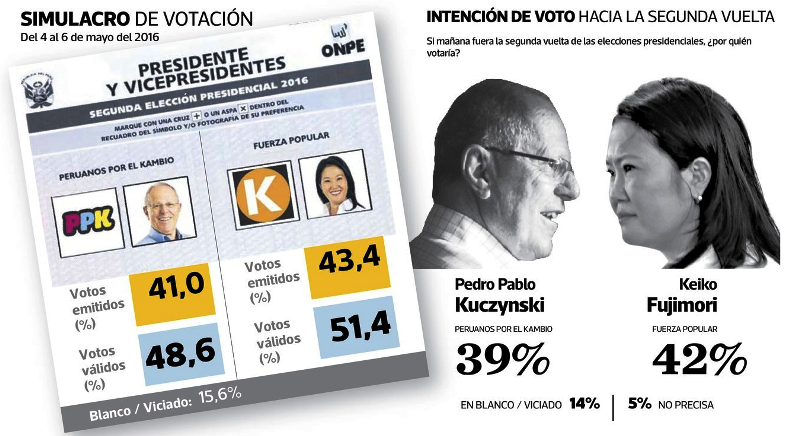 According to the Ipsos poll published in El Comercio on Sunday, Fujimori has turned a four-point deficit two weeks ago into a three-point lead. Fujimori garnered 43.4% of voter intentions compared to 41% for Kuczynski with 15.6% undecided or abstaining. Of the total valid votes, Fujimori would defeat Kuczynski with 51.4% over the latter’s 48.6%.

Fujimori’s 2.4-point lead before counting the undecided vote is just outside the survey’s 2.3% margin of error. This was the first survey from Peru’s most consistent pollster showing Fujimori with a lead over Kuczynski for the runoff election on June 5.

“The chances of [Kuczynski] winning are great because Fujimori has shown absolutely nothing that amounts to a proposal or alternative,” Peruvians for Change spokesman Juan Sheput told RPP. “She has simply benefited from our problems.”

Sheput as well as Ipsos pollster Alfredo Torres believe that Kuczynski may have lost some support due to his eight-day visit to the United States to visit his daughter on her birthday. He also held a campaign event in Paterson, New Jersey, home to the country’s largest Peruvian-American community.

Torres cites a public spat between Peruvians for Change leaders and an off-color remark deemed as racist from Kuczynski’s probable finance minister, Alfredo Thorne, as other news items which hurt the candidate.

Kuczynski may have also stumbled in promising to keep a state-mandated severance package mandate in place to go alongside his proposal of unemployment insurance, which would ultimately add to Peru’s benefit-heavy labor regulation which is seen as the main obstacle to formalizing the three of four workers who operate outside the legal system.

Meanwhile Fujimori has proposed a series of programs which would directly benefit large interest groups including informal miners, police and taxi drivers. Her proposals may have helped convince undecided voters to back her out of self-interest over policy. The undecided vote fell 3.4 points since Ipsos’s last poll two weeks ago.

Fujimori’s tireless campaigning is another strength which played to her advantage in the first round. In the last two weeks Fujimori attended eight events in Lima and six rallies in the rest of the country, compared to just three and four for Kuczynski.