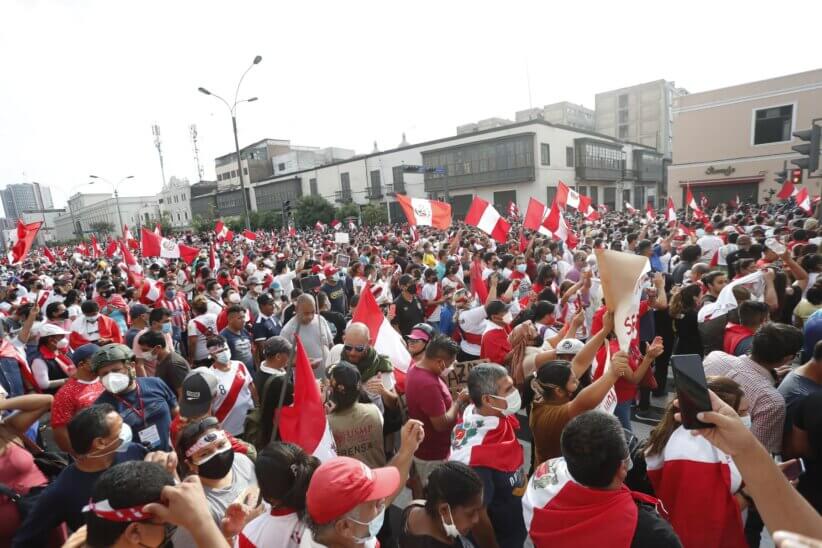 Thousands took to the streets in Peru on Saturday to demand the resignation or impeachment of President Pedro Castillo.

The Peruvian leader has six criminal investigations for alleged corruption against him.

In the capital Lima, Riot police used teargas to prevent the protesters reaching Congress and the presidential palace.

Aurora Cabello, a protester from San Juan de Lurigancho’s district, told Peru Reports during the march: “I’m marching against the government because it hasn’t helped us at all, it deceived us.”

Another citizen, Aquiles Rojas, described Castillo as a “liar.”

“He promised several things and has not fulfilled anything. I want that man to go away. We are poor, we have nothing, all the products have gone up in price,” he told Peru Reports.

During the march called “Reacciona Perú” (Peru Reacts), the demonstrators carried signs that read “Get out of here, Castillo!”, “Castillo, corrupt” and “Vacancia ya” (impeachment now!).

Lucas Ghersi, one of the organizers of Reacciona Peru, said that the objective of protesting on November 5 was to “seek a solution to the political crisis” and get rid of “a government that is more and more clearly involved in corruption”.

“We are seeing a country that is getting worse, its institutions are collapsing. The government has not been able to buy urea (fertilizers), all the time they are threatening a coup or shutting down Congress,” he told new agency RPP.

The protest were peaceful in other cities like Arequipa and Cuzco in the south and La Libertad and Piura in the north of Peru.

Mr. Ghersi added that “Reacciona Peru” is preparing a nationwide strike on November 20, the day of the arrival of the diplomatic mission of the Organization of American States (OAS), which will arrive in Peru to carry out an “analysis” of the political situation.

Castillo, who assumed the presidency in July 2021, has faced two impeachment attempts by the opposition in Congress and has six criminal investigations open against him.

The president also faces a constitutional complaint filed by Peru’s attorney general for alleged conspiracy, influence peddling and collusion. The complaint is now in the hands of Congress and could end in impeachment or suspension.

“I will be here until the last day of my mandate, because the people decided so,” said the president on November 5 during an activity at the Presidential Palace.

Castillo, a 53-year-old teacher, denies that his family has committed crimes and claims to be the victim of a plot against him.