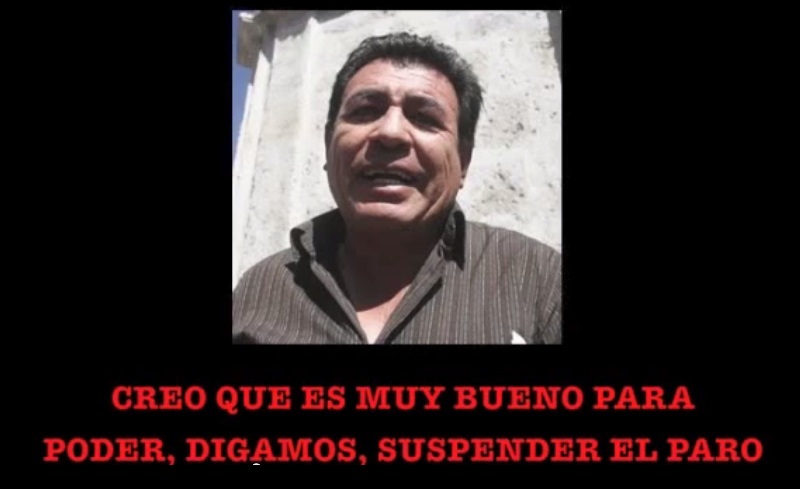 An audio recording published yesterday reveals a key leader of the anti-mining opposition allegedly asking for a bribe to end the indefinite protests against the Tia Maria copper mine in Arequipa.

In a video uploaded to YouTube, Jose “Pepe Julio” Gutierrez allegedly asks for $1.5 million to be split between himself, Dean Valdivia mayor Jaime de la Cruz and Tambo valley farmers’ board president Jesus Cornejo to end protests against the $1.4 billion copper mine.

“Last night I spoke with Jaime and Jesus … I told them one and a half. They told me that’s perfect. Five, five, five. The agreement is sustainable because definitely Jaime would back off, Jesus would back off, Pepe Julio would back off … With no logistics, any subsequent attempt at a strike would die. And we would be in charge of doing this very much out of sight,” says the voice which is alleged to be Tambo Valley Defense Front director Jose Gutierrez.

Gutierrez denies the authenticity of the recording. “They put things the audio doesn’t say. I completely deny this audio because the technology can do so many things that montages are easy to do,” Gutierrez told RPP. He added that even if it were his voice, recording it would be a crime and he is pursuing legal action.

La Republica reports that Jaime de la Cruz and Jesus Cornejo have denied such an agreement exists. The Tambo Valley Defense Front will decide today whether to expel Gutierrez from the organization. Cornejo has called for the opposition to distance itself from Gutierrez.

Opposition to Southern Copper’s Tia Maria copper mine has escalated in the last week during an indefinite strike which began March 23 in the Islay province of Arequipa department. A protester was killed by police on Wednesday in Cocachacra, a farming community at the heart of the mining opposition. Protest leader Jesus Cornejo was jailed on April 15. After being released he vowed to step up the opposition until Southern Copper abandoned its interests in the Tambo valley.

Three died in protests against the Tia Maria copper mine in 2011. Southern Copper has postponed the start date for production until the end of 2017 or early 2018. A subsidiary of Grupo Mexico, Southern Copper produced 680,000 tons of copper in 2013, of which 339,000 were mined from its Toquepala and Cuajone mines in southern Peru.