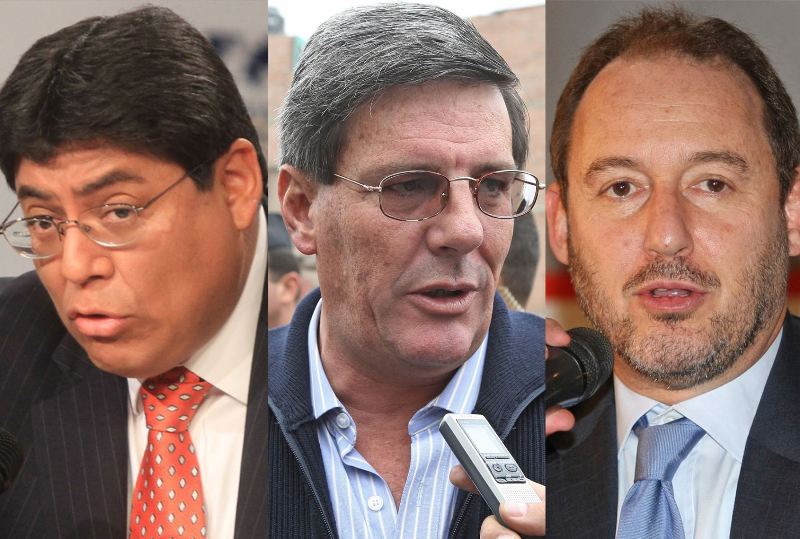 “This is a terrible contradiction from Fujimorism in this fight against corruption they have announced,” Popular Action congressman Yonhy Lescano told El Comercio. “Fujimorism has shown that it has not changed.”

While most critics accepted the nomination of career economist and Macroconsult partner Elmer Cuba, the nominations of Chlimper and Rey drew accusations of politicizing a nominally independent entity which controls monetary policy. Both Chlimper and Rey ran as running mates for Keiko Fujimori’s presidential candidacies in 2016 and 2011 respectively.

While Chlimper served as a central-bank director from 2006 to 2011, his career has mostly been in agriculture and politics. But his election infuriated politicians who point to his role in disseminating doctored audio in an attempt to smear a man who accused the then-chairman of Popular Force, Joaquin Ramirez, of money laundering.

Meanwhile Rey, the APRA candidate and Popular Force ally, is an engineer by training with no experience in economics, banking or finance. He has extensive experience in politics as agriculture minister, defense minister and ambassador under former President Alan Garcia. He has also served in Congress and is the host of a political-discussion television show.

“The only thing I can say is that Mr. Chlimper was a director of the central bank in the past, he studied economics, so he is highly qualified for this position,” President Pedro Pablo Kuczynski told reporters. Finance minister Alfredo Thorne and Cabinet chief Fernando Zavala also praised the new central bank directors.

But observers say the ruling party is hesitant to criticize Popular Force, given it controls the legislature, in order to maintain governability. They point out that the legislators from Kuczynski’s party, Peruvians for Change, voted against Chlimper and Rey.

“Democracy is above all a limitation on power. Fujimorism must therefore be self-limiting because its biggest challenge in its quest to head government again someday is to show that it will not abuse its power,” says a Semana Economica editorial. “With the election of Chlimper, it is about to jettison the good reputation that still has in the matter [of monetary policy].”

Critics worry the autonomy of Peru’s central bank, which has earned global esteem for sound monetary policy, is being compromised by politics. And Popular Force was not alone in favoring political loyalty over any illusion of economic experience.

The center-left Popular Action also nominated an engineer and politician in Carlos Herrera, a former mining and energy minister under Humala whose pet cause is renegotiating the contracts to extract higher royalties on exports from producers at the Camisea natural-gas fields in Cusco.

Humberto Campodonico ran for Congress in 2016 with the leftist Broad Front party. The engineer by training served as president of Petroperu for just over a year under President Ollanta Humala, during which time he initiated the $3.5-billion modernization of the Talara refinery. Campodonico is one of the loudest voices calling to expand the role of the state oil firm in Peru’s energy sector.

“We believe that is what a responsible central bank should do within the framework of its autonomy,” Mendoza told El Comercio at the time. She added that as president she would appoint four directors who share her vision. “To be clear, I will respect the autonomy of the central bank. But in government, one assumes leadership to transfer their vision.”

Peru’s Constitution specifies that the Central Reserve Bank of Peru’s only objective is to maintain price stability and control inflation, in accordance with the generally accepted role of central banks.

“[Peru’s central bank] has been internationally recognized for its outstanding management in recent years. And that is largely because the various governments and legislatures understood that the highly specialized entity’s administration should be immune from the interests and fluctuations of party politics,” today’s El Comercio editorial reads.

“However, Congress yesterday – and Fujimorism in particular – set an awful example of prioritizing partisan interests above those of the country.”

The board of Peru’s central bank is made up of seven directors, four of which are appointed by the president. Kuczynski in August reappointed board chairman Julio Velarde for a second term.

The five nominations from Congress contrast with the three technocrats appointed by Kuczynski’s government. Miguel Palomino, Javier Escobal and Gustavo Yamada are each career economists with experience in United States, Europe and Peru.