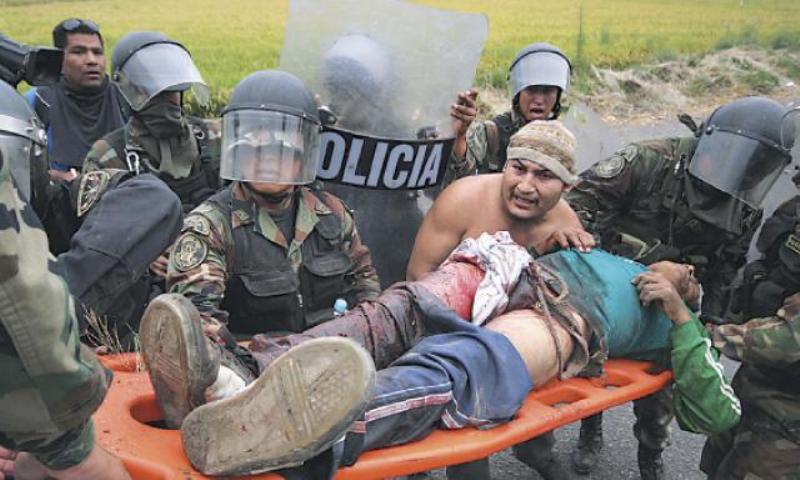 One protester was killed yesterday and 22 injured in ongoing protests against the Tia Maria copper mine in the Arequipa department of southern Peru.

Clashes broke out between police and protesters attempting to block the Panamericana Sur highway in Cocachacra, the base of the movement against the $1.4 billion copper mine in the Tambo valley of Islay province. A subset of protesters calling themselves “The Spartans” threw rocks at police from behind wooden shields. Police responded with tear gas and pellet guns in a battle that lasted three hours. According to local police, the 61-year-old protester who died did not suffer a bullet wound, but a key artery was severed by a broken leg.

However Richard Ale, mayor of Islay province and a leader of the anti-mining movement, declared that the protester was killed by a bullet. Ale dismissed the police account of an artery severed by a broken bone, referring to the incident as a “murder.” Cocachacra mayor Elard Valencia told La Republica that videos recorded by local residents prove the police used firearms in response to the protests.

“The police have fired [on protesters] and shell casings have been found. We have called the authorities but nobody answers the phone. We feel unprotected. The central government does not want to be realistic about what is happening down here,” Valencia said.

Eleven of the 22 injured were police officers. Arequipa police have issued a statement calling for calm and underscoring its “unconditional respect for human rights.”

In the city of Arequipa, a 24-hour strike yesterday was peaceful. The most extreme development was the blocking of a bridge in the northern outskirts. The urban transport workers did not support the strike, so public transit was largely unaffected.

After protest leader Jesus Cornejo was released from an Arequipa jail on Sunday, protest leaders promised to “radicalize” its opposition to Southern Copper’s Tia Maria copper mine. Cornejo was jailed last week after prime minister Pedro Cateriano and members of his cabinet attempted to open a dialogue with local opposition in the Islay province, which have held an indefinite strike since March 23.