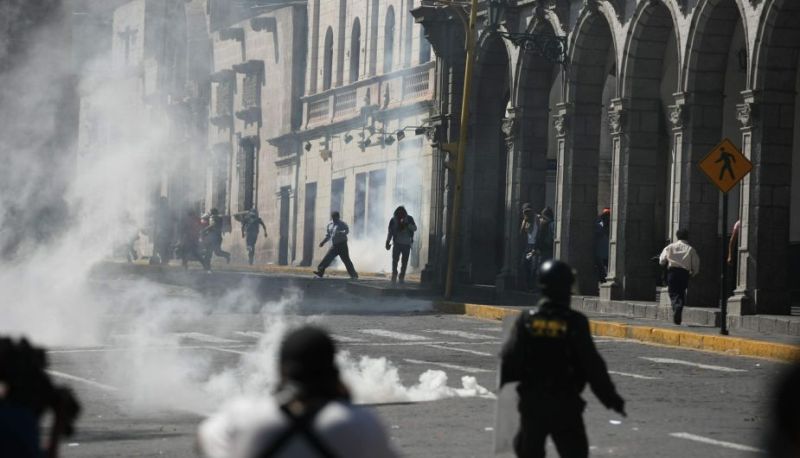 Protesters opposed to the Tia Maria copper mine project damaged property and clashed with police in a citywide strike in Arequipa.

On the last day of a three-day strike against the $1.4 billion copper mine, protesters damaged property throughout the city and the central plaza briefly became a battlefield between police and rioters known as “The Spartans.” The unrest came after two comparatively peaceful days in a strike held in the regional capital of Arequipa.

About 800 protesters assembled in the city’s central plaza yesterday around 1:30 p.m. They removed cobblestones from Mercaderes and Rivero streets to form barricades for their battles with police. Armed with slingshots and shields, the protesters launched the cobblestones and, according to some reports, detonated dynamite. Police used tear gas to disperse the mobs in what amounted to four hours of clashes in downtown Arequipa.

In a construction workers’ march along Ejercito and La Paz avenues, protesters broke windows of homes and businesses, including the buildings of radio stations Exitosa and Karibeña. Protesters blocked highways that access Arequipa from outside the city, leaving over 200 cars stranded in traffic.

Thirty-six injuries were reported at the end of the day, of which 22 were police officers. A handful of journalists were also injured on the Grau bridge serving the city center. Police arrested five protesters, who Correo reports were residents of Trujillo, Cusco and Moquegua.

In Islay province, sixty miles from the city of Arequipa, indefinite protests enter their eighth week. In Cocachacra 200 police faced off with 500 protesters armed with rocks, slingshots, bottles and wooden shields, leaving four police and four protesters injured. In Majes a police officer suffered a broken arm and broken leg after being surrounded by protesters.

Despite those clashes, Arequipa police chief said last night that the Islay province was under control. “The police are controlling the situation. Most people reject the protests, and they want to make their views known because of the threats, extortion and violence,” Enrique Blanco said. “They are desperate acts, but these people are not truly representative of the Arequipa people. Of 1.2 million residents in the region, about 400 or 500 people are committing these acts.”

As the situation seems to be spiraling out of control for President Ollanta Humala, members of congress have demanded prime minister Pedro Cateriano and mining and energy minister Rosa Ortiz appear to explain the government strategy in dealing with the conflict. One congressman draped himself in a flag and announced he would not leave the congressional chamber until Cateriano appeared. Cateriano is scheduled to speak before congress today at 11 a.m.

While Humala’s government seems to grapple with a strategy in the face of increasing violence in Arequipa, it has reiterated that the copper project will not be abandoned. “The government does not defend companies … We defend the rule of law, and the rule of law should be a policy of national unity, just like the policy of driving investment,” Humala told reporters yesterday. He added that there was still time for negotiations and denounced ulterior motives and criminal interests among protest leaders.

President Ollanta Humala deployed the Peruvian military to restore order in Islay province this week after protesters killed a police officer. Indefinite protests which began March 23 have led to three deaths and over 200 injuries. Negotiations have failed twice. Protesters concerned for local agriculture demand that Southern Copper abandon the $1.4 billion copper mine. Three died in Tia Maria protests in 2011.