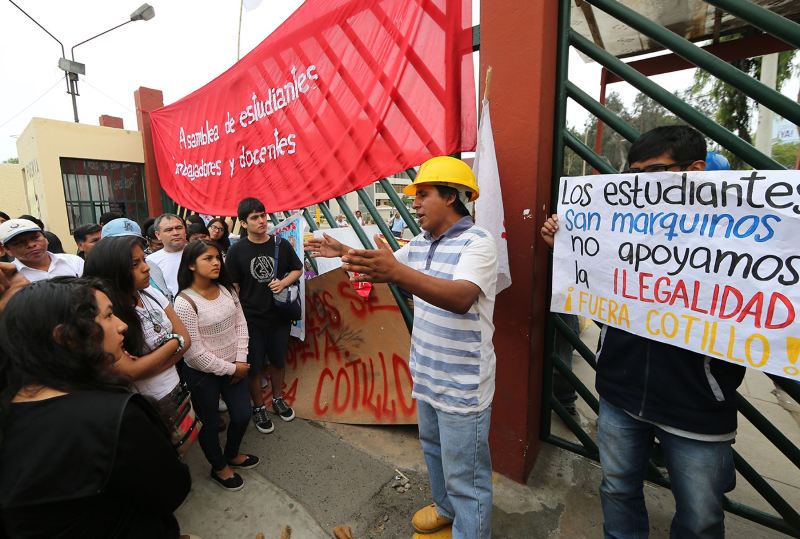 Students fought university employees over the resignation of the dean of San Marcos National University in Lima on Monday.

Peru’s new “University Act” required by Dec. 31 the resignation of San Marcos dean Pedro Cotillo as well as other university deans who do not qualify to hold leadership positions at public universities. Cotillo was one of five university deans throughout Peru who had refused to resign.

Students demanding Cotillo resign clashed with university employees who support Cotillo on the San Marcos campus in Lima. The university board convened to elect an interim dean. However at least two universities are still in limbo under the law.

“We invoke those deans who are still in rebellion to enlighten their minds and observe the rule of law,” President Ollanta Humala said from Apurimac.

Sunedu officials have stated that degrees and diplomas bearing the five rebel deans’ signatures will not be valid, which would prevent students in fields such as nursing and law from qualifying to take state exams.

The university reform looks to improve Peru’s network of higher education, which is one of the lowest rated in the region. Proponents say that the free market has created a chaotic environment of low-quality institutions.

A study by Utero journalist Manuel Bellido showed that Peru’s best universities publish fewer research papers and are ranked lower than their counterparts in Colombia, Chile and Mexico. Most Peruvian universities publish less than one paper for every five professors, and 50% of Peru’s students attend institutions which publish only 2% of the national total.

The University Act places new requirements on higher-education programs and staff. The law limits the age of university deans at 70 years old and requires all university leaders to have completed doctorate degrees. Master’s and doctorate degrees must comprise a minimum of 48 and 64 credit hours respectively.

While reformists say the law will reduce the congestion of low-quality institutions in the market, critics including Pedro Pablo Kuczynski say the law removes higher education’s autonomy.

“I’ve always said that the University Act worries me, because it can be interpreted as a way to control what is taught and discussed in universities,” Kuczynski told El Comercio. “It can be seen as a law against freedom of thought and education.”

Leading candidate Keiko Fujimori as well as former presidents and current candidates Alan Garcia and Alejandro Toledo also oppose the University Act. Ironically, the only candidate among the top five contenders in favor of the law is Cesar Acuña, who is the founder and owner of Cesar Vallejo University, one of the poorest-performing institutions considered to be part of the problem.

After being signed into law in 2014, the University Act was challenged by the national rectors association in 2015. Last November Peru’s supreme court ruled that the law was constitutional.