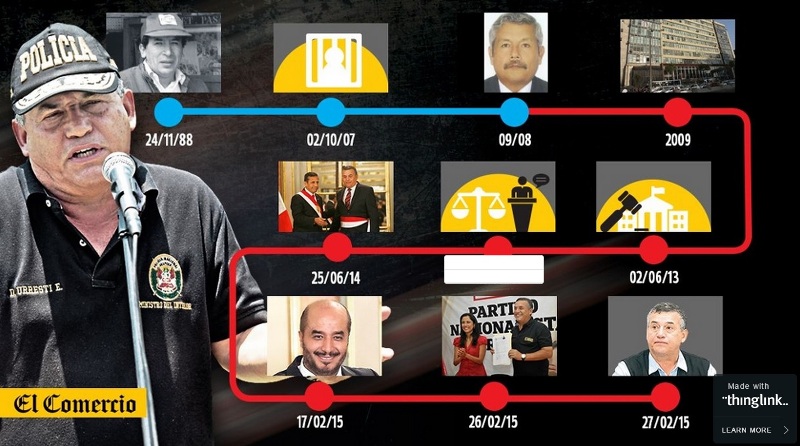 A tribunal has rejected prosecutors’ charge of crimes against humanity and the 25-year prison sentence in its murder case against presidential candidate and former interior minister Daniel Urresti.

One member of the tribunal criticized the charge of crimes against humanity. “[The prosecutor] does not explain the legal justification in Mr. Urresti’s legal situation, considering there is a legal sentence imposed on La Vera and Vidal that did not include that charge,” the legal opinion states.

Colonel Victor La Vera, the top-ranking officer at the Castropampa military base, and Amador Vidal were convicted in 2007 of the 1988 murder of Caretas journalist Hugo Bustios, who was executed by the military in the Huanta province of Ayacucho department at the height of the armed conflict with the Shining Path.

Two years later, Vidal told investigators that Daniel Urresti was involved. Until that time, Urresti had not been implicated, even though he was the head of intelligence at the base in 1988. In February a public prosecutor filed charges against Urresti.

The tribunal’s second issue with the prosecutor’s case was that La Vera and Vidal, two officers of higher rank than Urresti at the time, were only sentenced to 17 and 15 years respectively. The tribunal rejected the possibility that the lower-ranking Urresti be sentenced to a stiffer penalty than his superiors.

“My conscience is clear. I trust the court and the tribunal members who have shown fairness. I am calm,”Urresti said in an interview on RPP last night. “I am completely positive that then will not convict me. I trust the system. This [case] is far-fetched.”

Urresti has toured the country in preparing a presidential campaign in elections next year, when he will most likely represent President Ollanta Humala’s ruling Nationalist Party. He has attacked candidate Alan Garcia, who he blames for the censure of prime minister Ana Jara, with increasing frequency for corruption and the APRA party’s drug trafficking connections.

A recent poll placed Urresti fifth among the field of likely presidential candidates with only 6% of voters intending to vote for him. Approval for the administration of President Humala and first lady Nadine Heredia is among the lowest in Latin America.