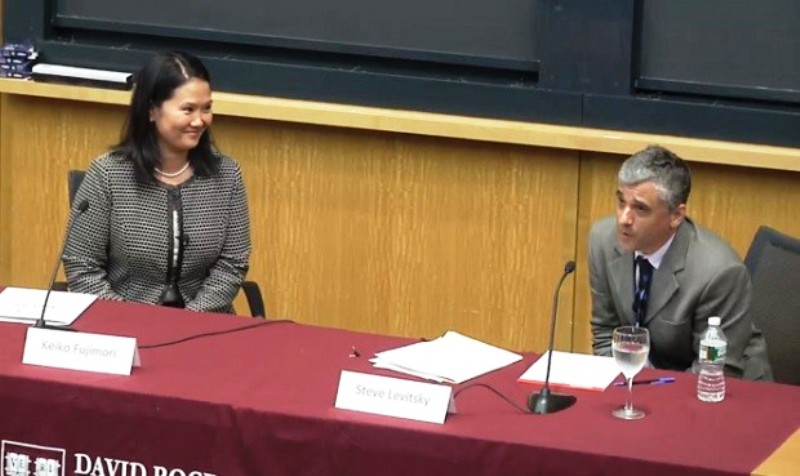 Peru’s leading presidential candidate, Keiko Fujimori, generated controversy within her party for comments she made at a conference in the United States.

In a conference at Harvard University, Fujimori endorsed the Truth and Reconciliation Commission (CVR) report which largely condemned the government of her father, President Alberto Fujimori.

“The CVR had successes in what is referred to as ‘pacification’,” Fujimori said. “Success in laying the foundation for economic stability and peace with neighboring countries. The work of the Truth and Reconciliation Commission has been positive for our country.”

While the Peruvian press seized on Fujimori’s apparent endorsement of the CVR report, Chavez tweeted that Fujimori’s comments do not represent a reverse and that the fujimorismo movement is comprised of “thinkers, not robots.”

However Popular Strength congressman Julio Rojas resigned from the party after Fujimori endorsed civil unions for gay couples. “I have decided to stay firm in the defense of the principles and values of life and family,” Rosas wrote in a resignation letter.

The fujimorismo bloc has social conservative elements diametrically opposed to abortion, even in cases of rape, as well as civil unions. Fujimori qualified her endorsement in saying that, while she supported civil unions she was opposed to gay couples adopting children. She said she opposes abortion except in cases to save the mother’s life.

Asked about the forced sterilization program carried out among hundreds of thousands of indigenous women in the Andean highlands under her father’s government, Fujimori said that she blamed the doctors and advocated reparations from the state, which renewed legal battles assisted by Amnesty International campaign have pushed for.

“It is important to recognize as president of Popular Strength that serious mistakes were made,” Fujimori said about her father’s government. “We made mistakes, learned from them and I will not allow them to be repeated.”

While those comments seem to undermine Popular Strength congressmen who have toed the line for years in defending the former President whose name inspired the fujimorismo movement, most in the party have closed ranks to defend their leader’s statements.

The harshest criticism may have come from Peru’s left wing via former Lima mayor Susana Villaran, who dubbed Fujimori “K-maleon” for “chameleon.”

“No, K-maleon, you don’t fool us,” Villaran wrote on her Facebook page. “Your past is all you can offer in the future. Because your silence and acquiescence during those eight long years as first lady, and during your insignificant time in congress and Peruvian politics your even greater silence on human rights violations committed by your father and Montesinos made you an accomplice.”

Analysts believe Fujimori is moving in an attempt to win the 2016 elections in the first round. Others say the comments may have looked to weed out politicians who lack the flexibility to move to the center in anticipation of a possible runoff, in which she may face a centrist candidate in her closest contender, Pedro Pablo Kuczynski.