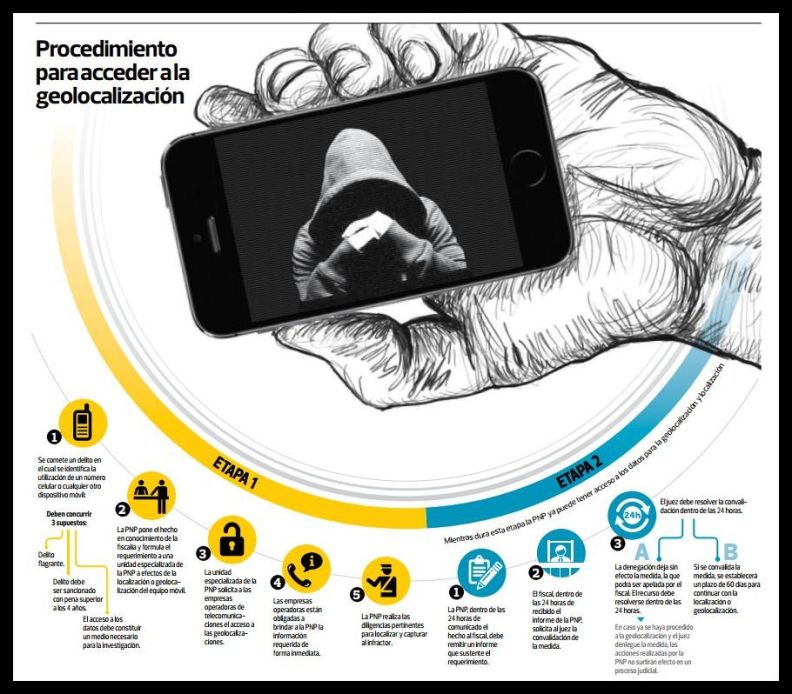 Peru has enacted a set of laws aimed at stemming rising crime rates, one of which gives police access to cell phone users’ identity and location.

One law increases the prison sentence for contract killers to a minimum of 25 years. The law mandates life in prison when the assailant kills a minor, kills more than one person or uses “weapons of war” in an assault.

The decree also makes murder-for-hire conspiracy a crime. Soliciting or offering murder services, even if nobody is killed, will be punishable with five to eight years in prison.

Another decree allows for Peru’s law enforcement agencies to offer financial rewards to citizens who provide information on criminal organizations.

However the most controversial decree enacted on Monday will mandate telecommunications companies to provide metadata about cellular phone use to police.

The decree comes two months after the government enacted new requirements to obtain a cell phone, including national identification and biometric data such as fingerprints or an iris scan, in order to combat extortion gangs.

To trace a cell phone or identify its user, the police request must meet three requirements. The request must be timely, specifically within 24 hours of the phone call. The crime under investigation must be a felony punishable with a prison sentence of at least four years, and the physical location of the mobile device must present an indispensable lead in solving the case.

Adrianzen added that law enforcement officials will have 72 hours for a request to pass three intermediaries: the police who solicit the information, the public ministry and a judge.

“I believe that if we appropriately use the contract killings law, and now the ‘geolocation’ law and the rewards payments, then we are targeting exactly what is generating so much concern about crime: contract killings and extortion,” said former interior minister Wilfredo Pedraza.

However privacy advocates point out the potential for abuse. When police make metadata requests to the public ministry, the location and identity information is provided without judicial oversight. A judge can approve or reject the request later, but only after police have already received the information.

“Police will have the data [before] requesting confirmation from a judge. And if the judge does not approve [the request], the police have the data anyway,” said civil rights lawyer Erick Iriarte. “Police can make requests from operators as a shot in the dark, violating fundamental rights.”

Iriarte also noted that the law requires telecommunications operators to collect and store metadata for all phone calls for 36 months, similar to the the controversial NSA program in the United States.

Proponents of the law say that bureaucracy in Peru’s legal system renders its law enforcement agencies impotent before extortion gangs. But Iriarte says that removing a judge from the process is a mistake.

However, while there are critics of the metadata law in legal circles, the decree enjoys general support among Peru’s political factions. Opinion polls indicate that rising crime is by far the most important issue for voters just one year before national elections.

Several high-profile news stories have made extortion a national priority, including the bombing of a Lima circus and the murder of a high school principal.

“[Geotracking] requires the threshold of a felony. Not just anyone can ask for this measure. The police have to explain why it is necessary. It is not a first step [in an investigation],” said constitutional lawyer Robert Pereira. “The levels of control are appropriate, proportional to the kind of measure and the seriousness of the crime that is being combated.”

Summary: Humala’s 2015 Message to the Nation