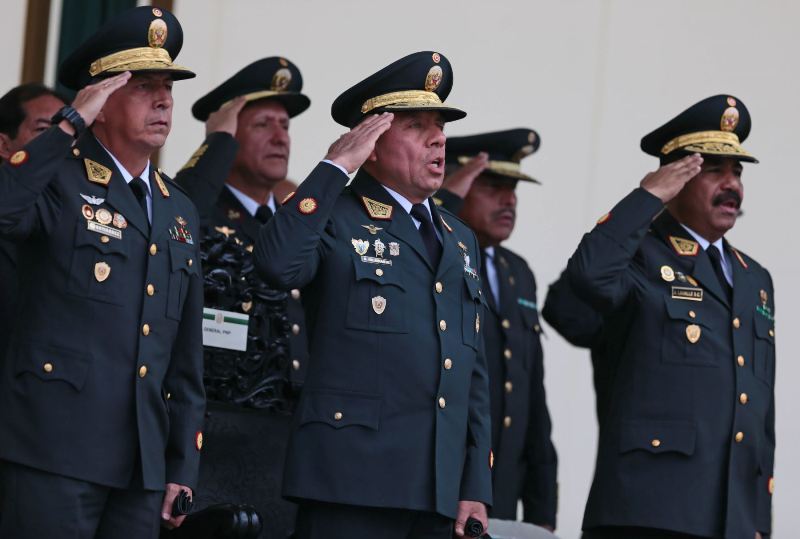 Peru’s interior ministry has retired almost half of the police force’s leadership in a reorganization aimed at reducing bureaucracy and increasing effectiveness.

After a one-month evaluation period, interior minister Carlos Basombrio fulfilled his pledge to drastically reduce the number of generals in the Peruvian National Police (PNP). On Friday the interior ministry retired 39 generals from the force, or 45% of the total. Twenty-seven of the retired generals were state police chiefs or national directors.

Basombrio said that the 47 generals who remain in their posts were more than he intended to keep. He originally wanted to reduce the number of generals to 31, but that such a change would amount to a “traumatic process.”

“The generals who have been passed to retirement will receive all their benefits and are not responsible for the chaos produced by the previous government,” Basombrio told El Peruano. “In the last two years of President Ollanta Humala’s government, under political pressure, the number of generals in Peru’s national police was artificially inflated from 31 at the beginning of his government to 86 at the end.”

Among the retired generals were PNP chief of staff Salvador Iglesias, the general tasked with police oversight and the generals who oversaw Callao, Lambayeque and the VRAEM.

While Basombrio repeatedly stated that the generals who were retired did nothing wrong, he also said that the ones who remain were selected because they were more open to fundamental changes in the police force. He also unleashed sharp criticisms of Humala’s expansion of the police bureaucracy.

“There is a direct relationship on how you organize and what results you get,” Basombrio told Andina. “If you distort a structure in order to be well-liked, you generate deep inefficiencies that result in poor work toward the objectives that should be achieved.”

Basombrio pointed to Colombia, whose police force has 50,000 more officers but only 28 total generals.

El Comercio reports that the interior ministry is also evaluating 600 colonels’ positions in its reorganization of the police force. Sources told the newspaper that Basombrio is looking to reduce the number of high-ranking officers by more than half, merge departments and even eliminate some altogether.

In addition to reducing the bureaucracy and making the force less top-heavy, Basombrio is evaluating how to reduce the number of command stations throughout Peru. His plan would merge 26 regions, which include Peru’s 24 states plus the constitutional province of Callao and the Lima metropolitan area, into just 10 “macro-regions.”

Colombia police officer Oscar Naranjo, who was decorated by the Canadian Mounties as the best police officer in the world and has worked as a consultant for national governments including Mexico, will advise Basombrio on the PNP’s restructuring.

Aside from the generals who have been passed into retirement, Basombrio’s overhaul depends on decree powers the government will request from Congress this week. If granted, his changes will take effect in 2017 at the earliest.

Basombrio’s reorganization has been criticized by some in the police force and the previous government.

“When decisions are made trying to blame others, you are not quite sure what you are getting,” former interior minister Daniel Urresti tweeted.

“I do not understand the thinking of the interior minister. He is a sociologist, a specialist in human rights,” Maximo Ramirez, one of the generals forced into retirement, told RPP. “I do not understand why the minister thinks that there is so much corruption police if he does not know anything about it … What does he think, that because I do not think like him I have to leave?”

The congressional defense committee will call Basombrio to testify on the generals’ retirements. Committee chair Luciana Leon said the number of generals retired was curious. But in an interview with Canal N the APRA congresswoman seemed more concerned with investigating whether the generals who received promotions had ties to Humala or former first lady Nadine Heredia.

Crime in Peru has increased since 2007. Street crime, extortion and hired killings have dominated headlines as citizen security became voters’ top concern in the 2016 elections. President Pedro Pablo Kuczynski promised an overhaul of the police force as part of his plan to fight crime.