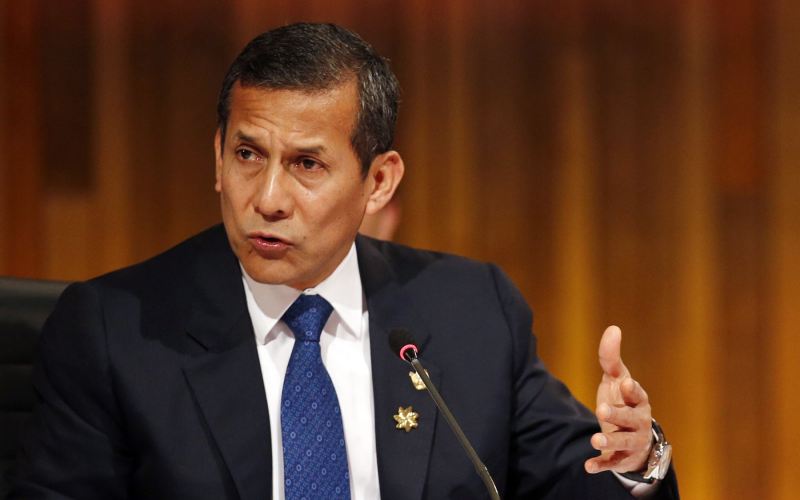 A court in Peru has ordered former President Ollanta Humala to post a $15,000 bond and restricted some liberties pending an investigation into corruption charges.

After hearing prosecutors’ arguments against Humala, judge Richard Concepcion ruled that the evidence was significant enough that Humala posed a flight risk from money-laundering and bribery charges that could result in 15 years in prison.

Humala must post a $15,000 bond or possibly face jail during the remainder of the investigation. The judge also required him to appear before the court every 30 days and request permission to travel, as well as forbid him from changing his address . In June the same judge barred former first lady Nadine Heredia, Humala’s wife and the focus of investigations into the Peruvian Nationalist Party finances, from leaving the country.

Prosecutor German Juarez alleges that Humala accepted and concealed illegal donations from the Venezuelan government under Hugo Chavez to fund his 2006 presidential campaign. He also argued that Humala accepted donations for his 2011 campaign and later kickbacks from Brazilian construction firms OAS and Odebrecht, which later won public-works contracts during Humala’s government.

“There is not sufficient evidence to investigate Humala,” the former president’s defense attorney told reporters.

OAS and Odebrecht are both central players in Brazil’s Carwash corruption scandal surrounding state oil firm Petrobras and various political parties. Former Odebrecht CEO Marcelo Odebrecht, who was sentenced to 19 years in prison for his role, is reportedly nearing a leniency deal in exchange for his testimony against politicians.

Investigators will interview Humala about the awarding of the $3.6-billion contract to build the Southern Gas Pipeline to Odebrecht in 2014. Since the Carwash scandal, Odebrecht is looking to unload its stake in the project amid a solvency crisis in Brazil.

The judge’s ruling comes one day after Humala testified before Congress about his government’s purchase of a $175-million satellite to observe Peru’s protected forests, coca-producing regions and agricultural fields. The legislature controlled by his nemesis Keiko Fujimori’s Popular Force has proven determined in its quest to investigate and prosecute Humala for alleged corruption.

“We see [Humala] has been very reluctant to respond. He has been rather evasive,” APRA congresswoman Luciana Leon told El Comercio. “We still have questions. It isn’t clear if there was transparency [in the purchase], if it was the right procedure, or if it was arbitrary.”

The congressional commission tasked with investigating the former president will look into the awarding of contracts for $17 billion of public works during Humala’s government.

In August Humala’s sister was assaulted at her home in Switzerland in an invasion where the assailants ransacked the house for documents and did not steal anything.

Humala left office on July 28 amid one of the lowest approval ratings in Latin America. He recently said at a Peruvian Nationalist Party event that the country would miss him.

“They attack us and say everything we did was bad. I think we must reflect and after the passions they will see the actions, and sooner than later they are going to miss us,” Humala said.

“When we arrived the annual budget was less than $29 billion, and we left it with $38 billion. So on average we administered about $147 billion, aside from our decisions that have involved the fate of billions of dollars in many projects [yet to be executed], and those projects are driving the national economy today.”