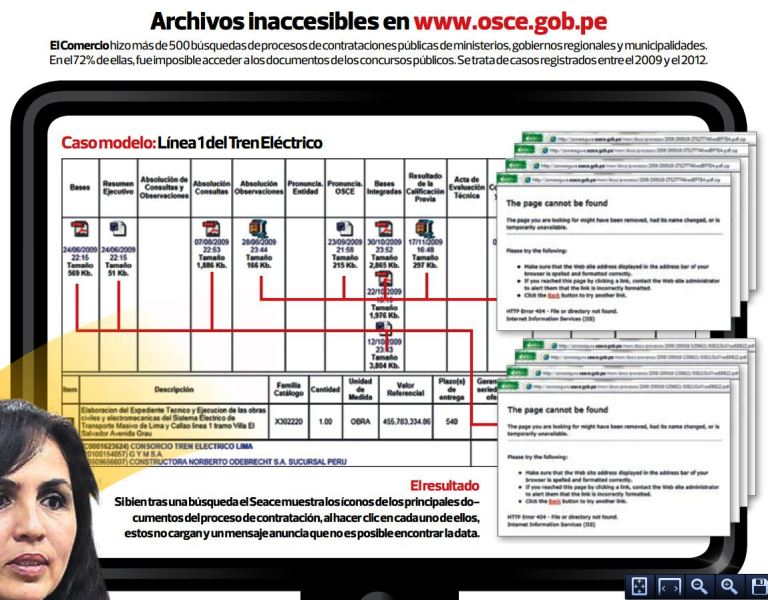 Peru’s state authority which oversees the government’s hiring of contractors has lost almost 800,000 digital files from its server.

The Supervising Body of State Contracts (OSCE) lost the files which span from late 2009 to the first months of 2012 after a database crash in November 2012. The files include documents related to the contracting of private companies and the details of procedural steps taken in the public hiring of private contractors.

All public records related to state purchases and hiring during that period are currently unavailable on the OSCE’s public database, SEACE. The loss comes at a time when prosecutors are preparing fraud and corruption charges in two of the largest organized crime cases in the last decade.

The first concerns President Ollanta Humala’s former political consultant, Martin Belaunde, who was extradited from Bolivia this year for political racketeering charges in which his Antalsis company obtained public contracts from regional governments worth millions of dollars.

The loss of public record also impedes the Lava Jato investigations into possible corruption in Peru’s government in the awarding of public contracts to Brazilian companies linked to Petrobras.

El Comercio reported the story this week along with various emails and memorandums from the OSCE’s former IT chief which warn of a pending crash.

While the 800,000 documents are unavailable on the OSCE servers and the SEACE database, the original documents are still located in physical form in the filing cabinets of national, state and local government offices around the country.

The OSCE has requested these offices send in copies of all public records from the period in question, for with the arduous task of scanned thousands of documents by hand has begun at over 1,000 state entities.

The congressional committee investigating Martin Belaunde summoned OSCE director Magali Rojas to testify before the commission about the data loss. Rojas will likely face questions about Rocio Calderon, former OSCE board member from 2011 until last June and friend of first lady Nadine Heredia who is also being investigated by the committee.

Fugitive military commander turns himself in after 13 years