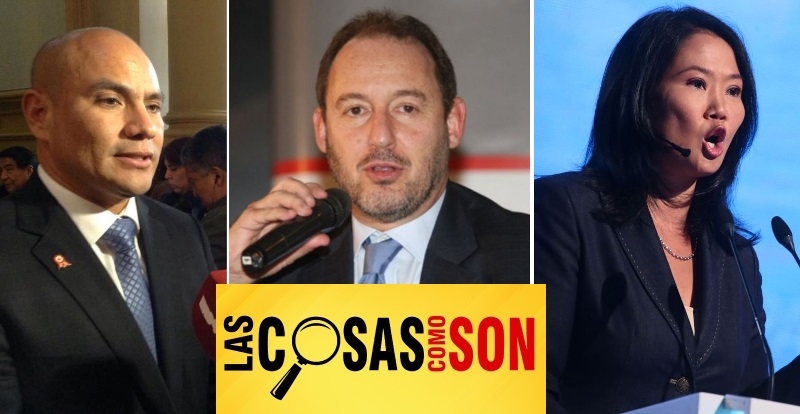 Peru’s Panamericana television network has cancelled one of its news programs after it broadcast an edited audio recording provided by Keiko Fujimori’s running mate.

On May 22 “Las Cosas Como Son” broadcast audio which seemed to discredit a pilot whose testimony led to the confirmation of a DEA investigation into Popular Force chairman Joaquin Ramirez for money laundering. In the new audio, Jesus Vasquez says he lied when he told Univision and America Television that he recorded Ramirez saying he laundered $15 million for presidential candidate Keiko Fujimori.

The story did not gain much traction in Peru after audio experts commissioned by other media outlets confirmed that the recording was clearly doctored. On Friday Las Cosas Como Son reporter Mayra Alban told El Comercio that Fujimori’s vice presidential candidate Jose Chlimper was the source of the audio, which was confirmed by Panamericana president Pedro Arbulu.

“This is a war that I won’t let myself be a part of,” Alban told El Comercio. She said that her producer gave her two flash drives without enough time to verify the authenticity of the audio or review the devices’ other documents before broadcasting her report.

Alban resigned from the program on Tuesday after reading other documents on the drive, which included emails revealing the source of the audio as Jaime Verastegui, a Popular Force congressional candidate who failed to win a seat in 2016 elections.

According to Alban, the doctored audio passed from Verastegui to Chlimper, to Arbulu, to program producer David Barturen and finally to Alban to transcribe for Sunday’s broadcast.

“Indeed, I gave Panamericana officials one USB, not two, with six documents that do not necessarily have anything to do with the audio broadcast by the program,” Chimpler told Canal N, adding that he had not listened to the audio. “In my case, stop talking about the alleged editing since I have not seen what was broadcast on Panamericana.”

“This deserves an investigation by the justice department,” Pedro Pablo Kuczynski told reporters in Cusco. “Reliable sources have said that [Fujimori’s party] has hired people to play dirty and sling mud … You always see things get heated at the end of a campaign, but this is not good. This exceeds the good faith that we support.”

On May 15 America Television reported that Popular Force chairman Joaquin Ramirez was being investigated by the DEA for money laundering linked to drug traffickers. Ramirez stepped down as party chairman three days later. On May 21 a leaked justice department document revealed that Peruvian prosecutors were investigating Keiko Fujimori and her husband Mark Vito for money laundering.

Fujimori opened up a five-point lead over Kuczynski in two different polls since the scandals were reported. Peru will hold its runoff election between Fujimori and Kuczynski on June 5.