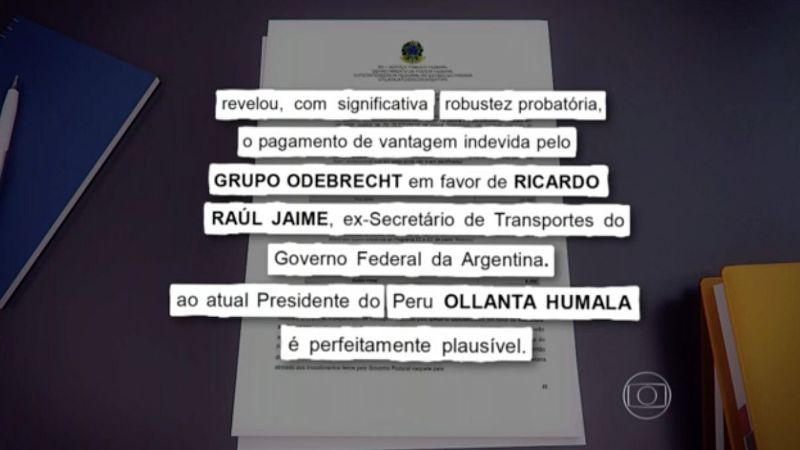 Among the terms believed to be used in reference to Humala include “Boy from the Jungle,” “humility” and the “OH Project.” A spreadsheet from Guimarraes notes two payments in Brazilian reals which, at the 2011 exchange rate, converted to $1.2 million and $3 million.

“In confirming this investigative hypothesis, the head of state of Peru would have benefited from the Odebrecht Group and this, in some way, would be linked to the investments made by the government of that country,” the police report reads.

During Humala’s administration, Odebrecht won public contracts valued at $152 million. Those deals do not include the $7.3 billion Southern Gas Pipeline project or over $60 million in contracts from regional governments including Cusco, Lambayeque and Callao.

An unidentified witness believed to be jailed influence-peddler Martin Belaunde told Peruvian investigators that Odebrecht representative Jorge Barata gave him a backpack full of cash to deliver to Ilan Heredia, treasurer of the Nationalist Party and brother of first lady Nadine Heredia.

The president’s office issued a statement denying the report from Brazil’s federal police on Monday night, before the Peruvian press picked up the story.

“Brazil ambassador, Mr. Marcos Raposo was called to the Government Palace by [President] Ollanta Humala along with Cabinet chief Pedro Cateriano and foreign minister Ana Maria Sanchez to express their denial of the statements and to request official information into the matter,” read the statement.

Humala made up a short section in the 44-page report from Brazilian police investigating the widespread corruption scandal in which state oil firm Petrobras and its contractors were involved in a massive kickback scheme with government officials in Brazil and throughout the region.

Several Brazilian firms are under investigation in Peru related to possible bribery during the governments of Humala, Alan Garcia and Alejandro Toledo.

Peru’s electoral board moves to bar Cesar Acuña from ballot