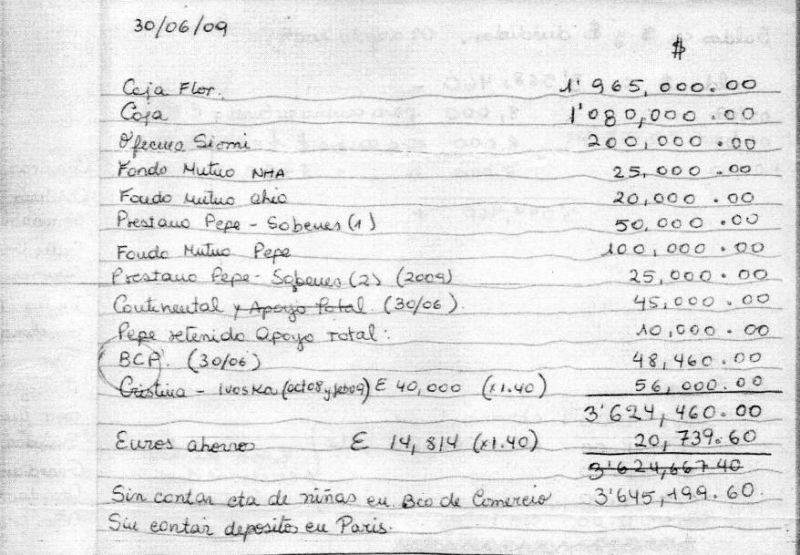 Just one month after an appeals court judge recently granted Heredia’s plea for habeas corpus for investigations into money laundering for allegedly false contracts, corruption prosecutors have added the first lady and her brother, Ilan Heredia, to investigations into Nationalist Party finances.

At the heart of the investigation are four notebooks attributed to Heredia which were turned in by a former Nationalist Party member who claim they were left at his house. The notebooks contain detailed information about million-dollar transactions including names and dates used to conceal the source of campaign donations which were moved to personal bank accounts.

While Heredia originally said in a private email to an El Comercio reporter that the notebooks were hers, she denied ownership of the documents in interviews with prosecutors last week.

“I want to reaffirm that I have never claimed these agendas as mine,” Heredia told the press after her interview with prosecutors. “I saw the content published on a website, and that is not my handwriting.”

If prosecutors can prove the information in the notebooks was recorded by Heredia, a judge will likely grant access to Heredia’s bank account history going back to the 2006 and 2011 elections, opening the door for more evidence against Heredia, her brother and the Nationalist Party for money laundering.

In addition to being first lady, Heredia is also the president of the Peruvian Nationalist Party and her brother was the treasurer. For their part, party allies have alleged the notebooks were forged and delivered by members of Alan Garcia’s APRA party and other political enemies.