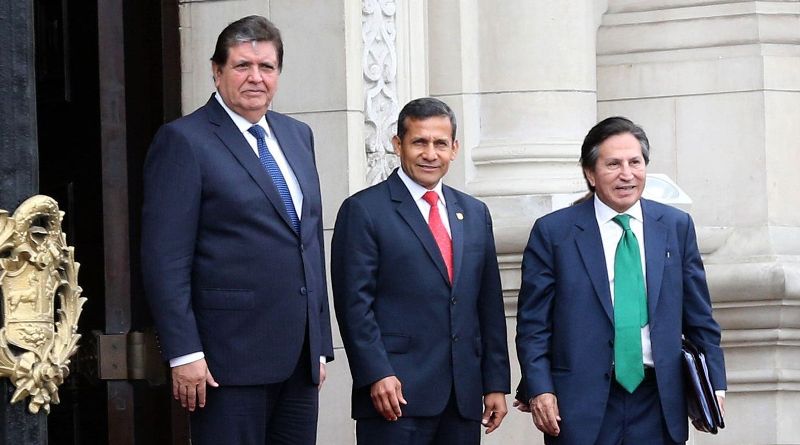 Two-time former President Alan Garcia garnered less than 6% of the national vote, the lowest of his four bids for Peru’s Government Palace. After 30 years of leading the APRA party, Peru’s oldest, Garcia resigned the presidency so party leaders could select a new direction without him.

“I call on all the Apristas to strengthen the party, to choose a vision that allows them to overcome with this situation,” said Garcia, who struggled with the highest negativity ratings due to perceptions of widespread corruption as well as the narco-pardons scandal during his second government.

APRA party spokesman Mauricio Mulder, who won reelection to his congressional seat to represent Lima, told ATV that Garcia wanted to withdraw his candidacy as early as January when the polls did not show him in serious contention. However the party leadership demanded that he continue in order to help win the 5% elections threshold required to seat APRA’s congressional candidates.

APRA director Javier Barreda told El Comercio that Garcia would assume an advisory role for the party. In addition to Mulder, APRA will likely seat four legislators in Jorge del Castillo and Luciana Leon for Lima, Elias Rodriquez for La Libertad and Javier Velasquez for Lambayeque.

When two-time presidential candidate Lourdes Flores entered her conservative Popular Christian Party (PPC) into an alliance with a longtime rival in APRA, observers speculated that the PPC was only looking to meet the elections threshold to remain a registered political party. While the PPC will keep its inscription, it failed to elect a congressional candidate for the first time since the restoration of democracy in 1980.

“We have seen an anti-APRA sentiment in voters which we thought would be overcome by the experience of Alan Garcia,” PPC secretary general Rafael Yamashiro told Andina. “But that sentiment could not be overcome.”

Leaders from both parties have confirmed that the alliance was effectively finished.

Former President Alejandro Toledo played a historic role in leading calls for former President Alberto Fujimori to step down after the divisive authoritarian won a third term in the discredited 2000 elections. But Toledo never formulated a clear message to compel voters to support him, resulting in his winning just 1.3% of the popular vote, less than jailed Cajamarca governor Gregorio Santos.

Former women’s minister Carmen Omonte, who is the most prominent politician in Toledo’s Possible Peru party, publicly challenged Toledo’s leadership of the party after he failed to garner enough votes to meet the elections threshold.

“Beyond the decision that Alejandro Toledo makes, I will personally evaluate the capability we have as a party, as the leadership, Alejandro Toledo and the party members, in recognizing what have been our errors, in truly understanding how we have failed,” Omonte told Peru 21. “If that doesn’t happen, I personally would not have anything to do with the party anymore.”

Toledo’s legitimacy has also been damaged by the belief that the former president is an alcoholic. The candidate slurred his speech to the point he was cut off during a radio interview in February. The subsequent parodies and social media memes may help to bury his future in politics forever. The perception was cemented by an impotent debate performance in which he failed to challenge his opponent, leftist candidate Veronika Mendoza.

Toledo has vowed to embark on a campaign to collect the hundreds of thousands of signatures required to register Possible Peru as a political party again.