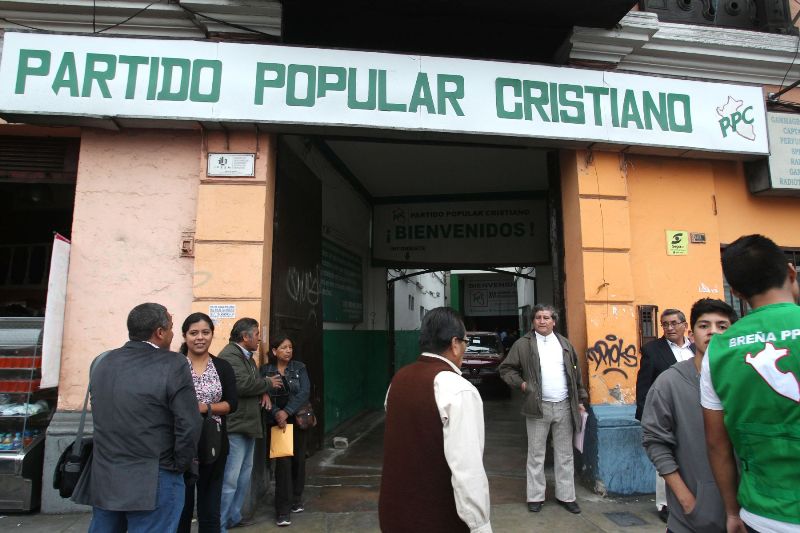 “The two factions within the PPC will have to realize that if they do not resolve their differences, this will threaten their survival as a party,” said political analyst Luis Benavente. “The price to pay for this division should encourage them to bury the hatchet and reach a deal. Either come together or die.”

However the rhetoric between reformists and institutionalists suggests neither side is willing to concede power.

“The new PPC is no longer a preppies’ party. It is more mestizo even though they don’t like that,” Castro said. “There are no rich kids here, much less Limeños who do not respect the provinces.”

“No scoundrel will stain the PPC,” Flores said, referring to the alleged primary fraud. “We must first morally recover the PPC.”

The factional struggle comes when Peru’s oldest conservative party must choose its strategy for the 2016 elections next April. Because no PPC politician attracts enough support to compete with Keiko Fujimori, Pedro Pablo Kuczynski or Cesar Acuña, the new party leadership will decide who to ally with.

Flores had proposed an alliance with Alan Garcia’s APRA party, which proved controversial among the institutionalist wing. Castro’s faction, if it chooses not to run a PPC candidate, may prefer to side with Fujimori’s Popular Strength or Pedro Pablo Kuczynski.

The factional strife comes at a time when the PPC holds the least power in its history. Of Peru’s 19 political parties which operate on a national level, the PPC counts the most registered party members. However the party has seen its popularity fade in recent years and currently has only five members in Congress.

All of the leading presidential candidates for 2016 occupy a center-right position, which leaves little room for a PPC candidate.

The Popular Christian Party was founded in 1966 by Lima mayor Luis Bedoya. In the 1980 elections following more than ten years of military rule, Bedoya lost his bid for the presidency to Fernando Belaunde.

As the PPC’s presidential candidate, Lourdes Flores placed third in the 2001 and 2006 elections which were ultimately won by Alejandro Toledo and Alan Garcia respectively.