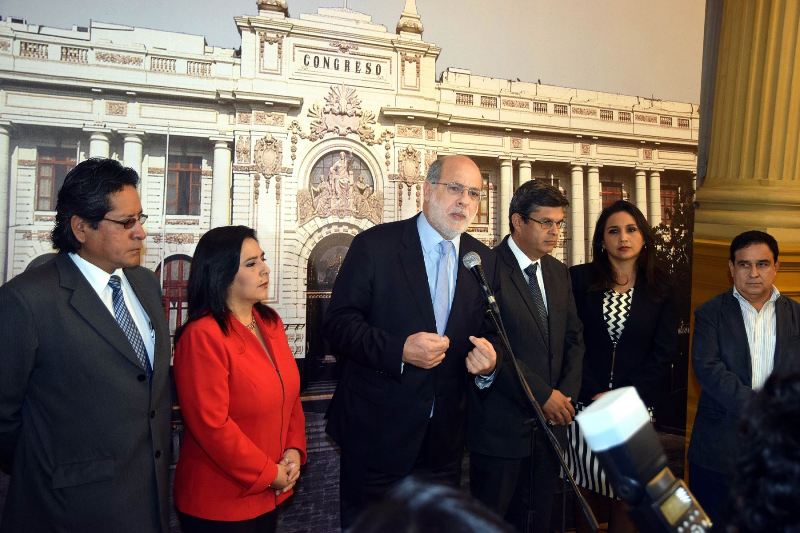 The Peruvian Nationalist Party has withdrawn its candidates for the presidency and Congress to avoid losing its legal status as a political party.

The party’s presidential candidate Daniel Urresti as well as high-profile incumbent congressman including Daniel Abugattas and Ana Jara will not be on the ballot for 2016 elections.

“I gave my body and soul to the campaign, always loyal,” Urresti wrote on his Facebook account after the party’s announcement. “It was an almost solitary battle, but heroic and I fulfilled my promise in not quitting. I hope that whoever decided to withdraw, and the six people who signed off on it, have not committed a grave error.”

The party’s national committee formed by President Ollanta Humala, first lady Nadine Heredia, Victor Isla, Fredy Otarola, Ana Maria Solorzano and Cynthia Montes decided not to participate in 2016 elections for what analysts believe is the fear that the party’s candidates would not garner the minimum 5% of the national vote to qualify for seats in Congress.

“The conditions for this election are not good to keep on,” said first lady and party leader Nadine Heredia. “That is why it is important and legitimate, in accordance with our bylaws, to leave open the possibility of continuing to be an active party on the national scale.”

Peru’s Law of Political Parties requires that a party obtain at least 5% of the popular vote in order for any of their candidates to be eligible to assume the seat in Congress. If a party does not meet the 5% election threshold, it loses its inscription with Peru’s electoral board.

If the party loses its legal status as a political party, it would have to go through the registration process again. In addition to various documents, the process requires collecting thousands of signatures of citizens who would look to join the party.

However, the Law of Political Parties allows registered parties to abstain from participating in one election without losing its inscription. So instead of facing the risk of not garnering the 5% required to maintain its legal status, the party of President Ollanta Humala will forego any presence in the government until it can regroup in 2021.

The withdrawal from 2016 elections comes at a time when Humala’s government is one of the least popular in the region with approval ratings of under 20%. A recent poll showed Urrest had less than 1% of voter intentions.

By skipping the general elections on April 10, the party can regroup for state and municipal elections in 2018. On the other hand, the widespread discontent which led to more than half of the party’s congressmen and both vice presidents to abandon the party could be too much for the party to overcome and develop a clear narrative to attract fresh support.

“I don’t know what the Nationalist Party wants to do,” Abugattas told Peru 21. “The party is made up of a group no bigger than ten people, and that is evident in what happened. The base and party members are in an uncomfortable position.”

Abugattas added that he will remain a member of the party, but admitted that he wouldn’t be surprised if they removed him from the party for his comments.