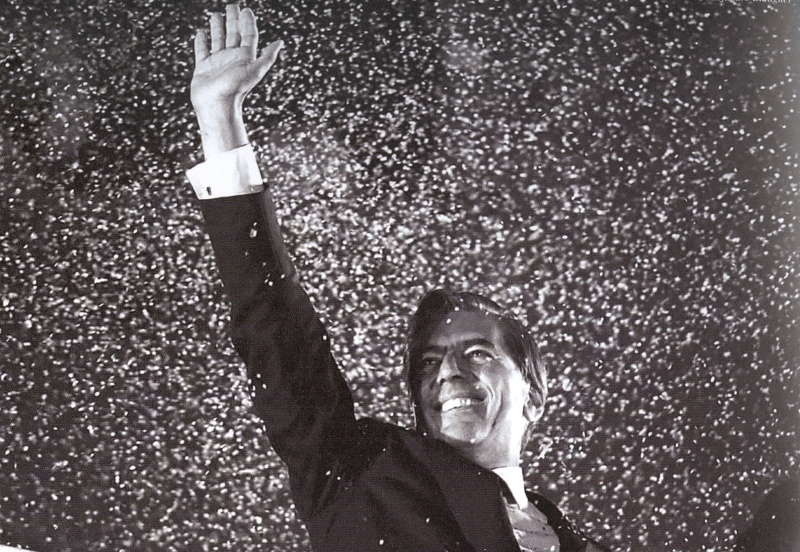 Mario Vargas Llosa celebrated his 80th birthday at a Madrid hotel on Monday, five years after The Economist called him “the region’s conscience.”

Two weeks ago Vargas had presented a book written by Lopez in solitary confinement during the two years he has been jailed in Venezuela under what Vargas called the “dictatorship” of President Nicolas Maduro. His call to free Lopez is the latest manifestation of Vargas’s long trajectory in a career that has spanned almost 60 years.

Born in 1936, instability in his family life as well as Peru’s political scene led Vargas to grow up between Arequipa, Piura and Lima in Peru as well as Cochabamba, Bolivia. He studied law at the National University of San Marcos while working for the newspaper, La Prensa.

Vargas published his first book, “The Leaders,” in 1959. But he would not grow to international prominence until the 1963 publication of “The Time of the Hero,” a novel set in the Leoncio Prado Military Academy where Vargas attended high school. The film critical of military life and conformity was made into a film in 1985 by director Francisco Lombardi.

Vargas followed his first success with “The Green House” about a famous brothel in Piura, and then “Conversation in the Cathedral” about the dictatorship of President Manuel Odria. The latter highlights Peru’s highly stratified culture of classism and racism through the eyes of a young reporter. Vargas also drew on his brief involvement in a subversive Communist study group as a university student during the repression of the right-wing dictator.

Vargas became a member of the Latin American Boom of literary figures in the 1960s and 1970s which also included Colombia’s Gabriel Garcia Marquez and Mexico’s Carlos Fuentes. In a region fatigued of American influence, the group also held a leftist political bent and fervently backed the Cuban Revolution and Fidel Castro.

However Vargas was unique among Latin American writers in being among the first to condemn Castro for his detention of Cuban poet Heberto Padilla in 1971. Vargas’s placing a higher priority on freedom of speech and ideas marked a departure from writers like Garcia, who supported Castro until his death in 2014. Vargas was ultimately ostracized by many in Latin America’s intellectual scene as he grew to embrace neoliberal policies and free-market economics.

In 1981 Vargas published “The War of the End of the World,” which the author considers to be his best work. The novel of historical fiction focuses on Brazil’s War of Canudos, in which a rural outpost of former slaves and other marginalized groups in the northern state of Bahia attempted to form an independent state inspired by religious and revolutionary rhetoric.

“Mr. Vargas Llosa has the temerity to question the uniqueness of the revolutionary mythos,” American novelist Robert Stone wrote in his review published in the New York Times. “Implicitly, by assigning revolution its place among the ritual dramas of history, he questions its salvific function. Thus he assumes the stance of liberal skepticism, one that should not be confused with pessimism … Far from being a posture of despair, it is one of faith and hope, more hope than many of us are capable of. In accordance with Santayana’s dictum, it declares that man’s capacity to endure is proportional to his historical insight.”

By the 1980s, Peru’s economy had been battered by the policies of the military dictatorship under President Juan Velasco, who oversaw mass nationalizations to bring the economy under state control. The second government of President Fernando Belaunde achieved few reforms when 35-year-old Alan Garcia was elected president in 1985.

The powerful orator had run on a nationalist and populist platform, and one of his first acts was to limit the amount Peru would pay its international creditors. The move was widely popular and had an initial benefit economically, but ultimately isolated Peru from global credit markets. Garcia’s statist model ultimately led to crippling hyperinflation and recession as the Shining Path guerrilla insurgency advanced toward Lima.

“Alan Garcia had been in office for two years and was still very popular. To me, his politics seemed like a time bomb,” Vargas wrote in “A Fish in the Water: A Memoir.” “Populism had been a catastrophic failure in Allende’s Chile and in Siles Suazo’s Bolivia. Why would it go over well in Peru?”

But when Garcia proposed nationalizing Peru’s banks and financial system in order to advance industry, Vargas wrote an editorial in El Comercio condemning the president’s plan. To his surprise, he was inundated with phone calls and letters from prominent Peruvians and regular citizens alike.

His editorial marked the beginning of Vargas’s foray into politics. Political personalities and entrepreneurs congregated around him as Vargas gave a series of speeches at popular sites such as downtown Lima’s Plaza San Martin.

“The recurrent theme of my three speeches had been that the way out of poverty does not lie in redistributing the little wealth that exists but in creating more,” Vargas wrote. “And in order to do that markets must be opened up, competition and individual initiative encouraged, private property not be fought against but extended to the greatest number, our economy and psychology taken out of the grip of the state, and the handout mentality that expects everything from the state replaced by a modern outlook that entrusts the responsibility for economic life to civil society and the market.”

Vargas’s popularity propelled him to becoming the frontrunner in the 1990 presidential elections, in which Belaunde’s Popular Action and Luis Bedoya’s Popular Christian Party joined his Liberty Movement coalition.

Vargas ultimately lost to a little-known university rector who surged in the final weeks. Vargas would later become a fierce critic of President Alberto Fujimori for his autocratic rule and dissolution of Congress. But many of Peru’s historians view Fujimori’s implementation of what was basically Vargas’s economic plan as a vindication of the author’s failure at the polls.

Vargas returned to literature in 1993 by publishing “Death in the Andes,” a tale set in the Andean highlands during the Shining Path insurgency which was inspired by his serving on a commission investigating the 1983 murder of eight journalists in the Uchuraccay Massacre.

In 2000 Vargas published “The Feast of the Goat,” a historical novel which explores the dynamics of power and intimidation set in the Dominican Republic under dictator Rafael Trujillo.

In 2010 the Swedish Academy awarded Vargas the Nobel Prize for Literature “for his cartography of structures of power and his trenchant images of the individual’s resistance, revolt and defeat.”

“Mr Vargas Llosa’s prose lacks the poetic intensity of Gabriel Garcia Marquez, his Colombian near-contemporary (and the last South American writer to win the Nobel, in 1982). But he more than makes up for this with his greater intellectual depth, subtlety and authorial rigor,” writes The Economist.

“His books are meticulously researched and carefully crafted … He is extraordinarily versatile and prolific. His novels include lighter, comic works, such as the autobiographical “Aunt Julia and the Scriptwriter” and the recent “The Bad Girl.” But he has also written plays, works of literary criticism and political essays, as well as a longstanding fortnightly column in Spain’s El Pais newspaper.”

Unlike his Latin American contemporaries, Vargas’s writing does not feature elements of magic realism. His stories feature large jumps between characters, settings and even time, a tactic inspired by William Faulkner. He has published dozens of books including novels as well as non-fiction works and plays.

Vargas’s latest book to be translated into English was “The Discreet Hero,” his first novel set in Peru after the economic boom which has made the country the regional star. This year he published “Five Corners,” which looks at corruption and yellow journalism in 1990s Peru under President Alberto Fujimori, in a veiled condemnation of the 2016 elections’ presidential frontrunner Keiko Fujimori. Vargas has endorsed Pedro Pablo Kuczynski, Fujimori’s top challenger and an economic adviser to Vargas during his own candidacy.

A universal Peruvian (The Economist)

A Fish in the Water (Mario Vargas Llosa)