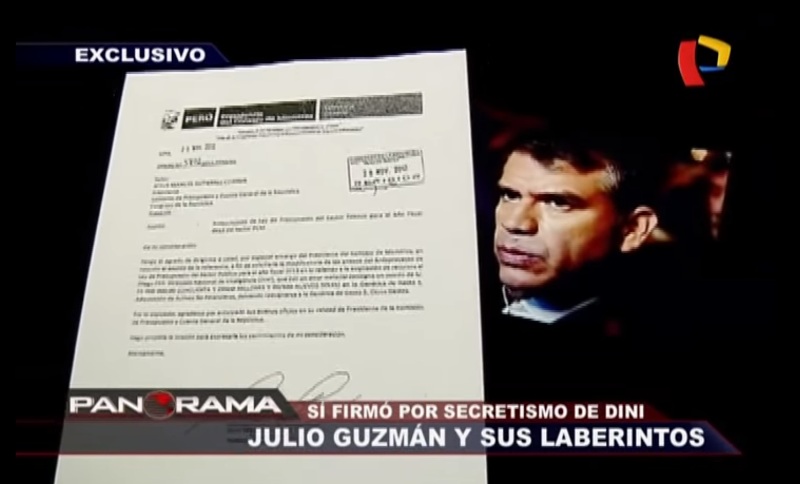 Presidential candidate Julio Guzman has been linked to Peru’s “Dinileaks” spying scandal by a document he signed while working in President Ollanta Humala’s government.

As secretary general under Cabinet chief Juan Jimenez in 2012, Julio Guzman submitted the official document which classified the details of a $15 million budget increase for Peru’s intelligence agency, DINI. The document revealed by investigative news program, Panorama, was signed by Guzman and directed to budget committee chairman and Nationalist Party congressman Josue Gutierrez.

Much of the $15 million increase, which more than doubled the DINI budget, went to purchase wiretapping and surveillance equipment which was ultimately used to spy on politicians, journalists and business leaders. The scandal, dubbed “Dinileaks” in Peru, led to a congressional censure of Cabinet chief Ana Jara and the resignation of all the Cabinet ministers.

The news has the political ramification of directly linking Guzman to the unpopular government of President Ollanta Humala and one of its biggest scandals.

“Julio Guzman had no involvement in this decision, as we have said, beyond transferring the Cabinet chief’s request,” Guzman’s campaign said in a statement. “The secretary general of the Cabinet works like a clerk transmitting information from the Cabinet chief to various government authorities … We also want to highlight that the only one who can make decisions on the DINI’s budget, according to law, is the president.”

In an interview on Panorama just one week prior to Sunday’s broadcast, Guzman denied having any role in the 2013 budget or administration of DINI, which is overseen by the Cabinet chief. Guzman said the function of the secretary general is a purely technical role similar to that of a clerk.

But officials in other governments as well as Humala’s administration have rejected that argument. They point out that the secretary general is the Cabinet chief’s right hand and similar in rank to a vice minister.

“It looks very serious because these Montesinos practices imply an undemocratic person,” former President Alan Garcia said at an economic forum. “Buying wiretapping and interception instruments, and doing it secretly without any bidding procedure is very serious.”

“The secretary general signs thousands of documents,” Guzman told reporters on the campaign trail in Arequipa. “I have no idea how many thousands of letters I signed because I had to transfer information. What matters is what the letter says, and this letter clearly states that this is not the secretary’s decision, but an information transfer.”

In addition to linking Guzman to Humala’s government, political opponents will also try to use the revelation to allege inconsistency in Guzman’s statements ahead of 2016 elections.

“By law, the secretary general does not have anything to do with budgetary issues or the DINI,” Guzman had said in the previous broadcast.

The Panorama program featured Guzman apparently contradicting himself in televised statements both for and against Peru’s Prior Consultation law as well as legalizing gay marriage.

In March, the Correo newspaper revealed that the DINI intelligence agency conducted over 100,000 data searches since February 2011 to amass files of information on personal property, health records, business filings and more on over 1,000 Peruvians. The scandal lead to Peru’s congress censuring Cabinet chief Ana Jara, who was replaced by Pedro Cateriano.