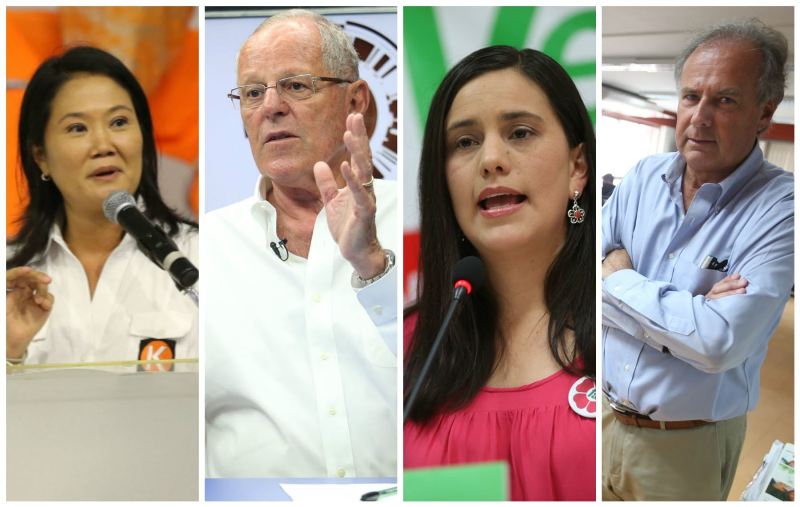 A recent poll shows Peru’s Veronika Mendoza in a statistical tie with Pedro Pablo Kuczynski to qualify for a runoff against Keiko Fujimori.

The Datum poll published today puts longtime frontrunner Fujimori in the lead with 42.1%, followed by Kuczynski with 18.6%, Mendoza with 17.3%, Alfredo Barnechea with 10.9% and Alan Garcia with 4%.

Kuczynski’s lead over Mendoza is within the survey’s 2.5% margin of error, putting the investor favorite and the left-wing candidate in a statistical tie to face the daughter of former President Alberto Fujimori in a runoff on June 5.

“We’re just one step away from the runoff,” Mendoza wrote on her Facebook page. “We are going to work even harder to continue carrying our message of hope throughout the country and make the change that Peruvians are looking for into a reality.”

The poll reflects a 13% gain in support for Mendoza during the last three months. The left-wing candidate was believed to be in a dead heat with center-left candidate Alfredo Barnechea before today’s poll showed her 6.4 points ahead.

Datum general manager Urpi Torrado attributes Mendoza’s rise to a recent wave of negative publicity. El Comercio recently reported on her links to first lady Nadine Heredia and alleged money laundering in the Peruvian Nationalist Party. The same week the Arequipa archbishop said voting for Mendoza would be “a sin.”

“Definitely, if a candidate has more media exposure and more media coverage, regardless of the content of the coverage, it has an effect that cannot be predicted,” Torrado told RPP. “In some cases the effect is positive, and in others it is negative.”

Political analyst Milton Vela told Peru 21 that other candidates’ attacks against Mendoza may be helping her.

“If you have a an anti-left message which is too radical, you can alienate an undecided voter who is not right-wing,” Vela said. “[Kuczynksi] launches right-wing attacks against Veronika Mendoza which only convince his own voters, when in reality he should aim to win the undecided vote, and the undecided cannot be convinced with a radical discourse.”

Keiko Fujimori, who is all but guaranteed to qualify for the runoff, seemed to be looking toward Mendoza as early as last Monday.

“Ideally, there could be a runoff between two women,” Fujimori told El Comercio. “But that decision will depend on the Peruvian people.”

Fujimori’s comments imply that she sees Mendoza as easier to defeat one-on-one than Kuczynski or Barnechea. The same Datum poll also simulated hypothetical runoffs between Fujimori and her top contenders.

While various polls showed Kuczynski edging Fujimori in hypothetical runoffs, Datum has Fujimori winning 41% to the economist’s 40% with 19% undecided. She would defeat Barnechea and Mendoza by seven and 10 points respectively, according to the poll.