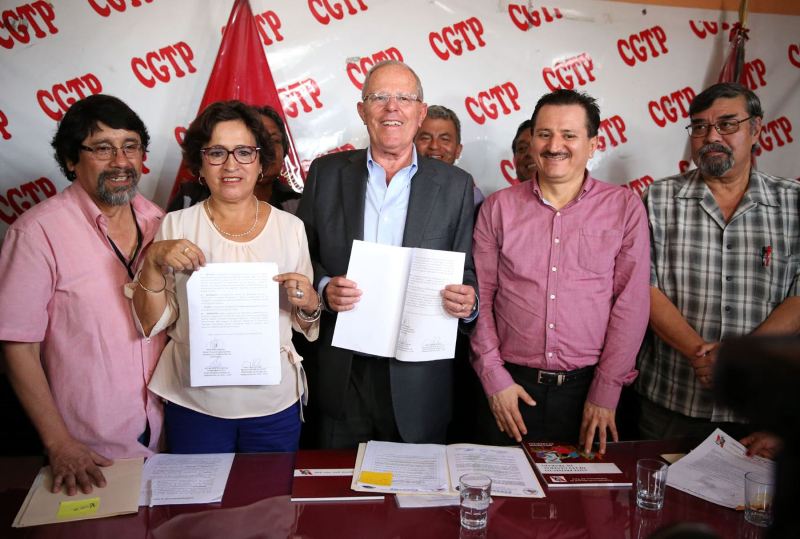 Kuczynski met with CGTP leaders in downtown Lima for the union’s 87th anniversary on Tuesday, where he signed a commitment to various organized-labor initiatives in Peru. The union announced on its Facebook page that, while Kuczynski is not the organization’s first pick, he is the lesser evil in an election pitting the former World Bank economist against Keiko Fujimori.

“Let us be clear,” the CGTP published on Facebook. “We call [on members] not to vote for Keiko Fujimori, which means that we’d work with Pedro Pablo Kuczynski and opt for the anti-vote given that Keiko is worse.”

The statement signed by Kuczynski pledges his commitment to the right to strike and collective bargaining. Most significantly, Kuczynski promised not to scrap Peru’s government-mandated severance package, which requires employers to pay laid off workers one month’s salary for every year they worked for the company.

Kuczynski agreed to push Congress to guarantee government employees’ right to collective bargaining, which was removed under the Law of Civil Service that took effect this year. Kuczynski committed to meeting with labor leaders to review the controversial aspects of the law.

Kuczynski also promised to work towards passing the General Law of Work, legislation long stalled in Congress and seen as further restricting one of the world’s least flexible labor markets.

“We guarantee to respect labor rights which, unlike our opponents, we will not be cutting,” Kuczynski tweeted after the meeting.

Three out of four workers are employed outside the legal system, which many economists attribute to the Peru’s rigid labor laws. The World Bank highlighted loosening Peru’s labor regulation as the most effective way to maintain economic growth. However a recent government study forecast that the informal sector will still account for over a quarter of Peru’s jobs in 2050 under current conditions.

“PPK recognized the work of the CGTP and noted that more than two thirds of Peruvians are in the informal sector without any rights,” the organization says on its website. “In this regard he said that 3 million formal jobs will be created under his government to bridge the gap, including 300,000 for young people. He promised to improve workers’ income and the services provided by the state.”

Peru’s largest labor union went to pains to say it was not formally “endorsing” Kuczynski, but merely endorsing a vote to prevent Keiko Fujimori from winning the presidency. Leftist candidate Veronika Mendoza also rejects endorsing Kuczynski despite her call to vote against Fujimori serving the same end.

Fujimori never had a chance in winning the union’s endorsement given the 1992 murder of CGTP secretary general Pedro Huilca by a death squad authorized by her father, former President Alberto Fujimori. But Fujimori further drew the union’s ire on Labor Day when she met with Augusto Ramos, who is alleged to lead an extortion gang which targets construction unions.

“We have given the signal that Keiko, never,” CGTP secretary general Carmela Sifuentes told reporters after meeting with Kuczynski. “What we are sure of, is no more fujimorismo in Peru.”