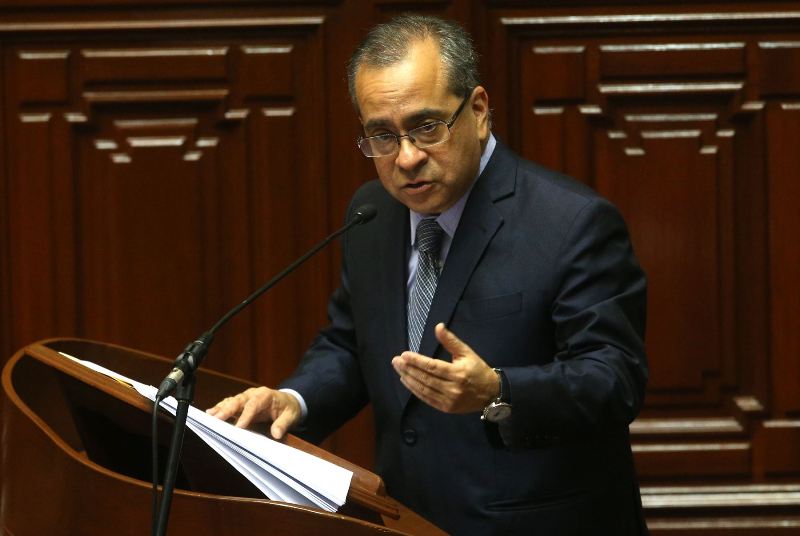 The Popular Force party which controls Congress has signaled that it will vote to sack President Pedro Pablo Kuczynski’s education minister Jaime Saavedra.

The party led by Keiko Fujimori, Kuczynski’s opponent in 2016 elections, called Saavedra to testify before Congress about presumed irregularities in his ministry’s purchase of $43 million in computers and delays in the construction of facilities which will host the 2019 Pan American Games in Lima.

Saavedra testified for two hours in a session which was widely criticized as a political witch hunt led by Popular Force and the APRA party. Popular Force spokesman Luis Galarreta and APRA spokesman Mauricio Mulder both criticized Saavedra after his testimony for failing to acknowledge his ministry’s failures.

“There has not been any self criticism,” Galarreta said during the debate following Saavedra’s testimony. “There is not even one minute in which the minister said there was negligence or responsibility.”

“In three years [since Saavedra took office], not one brick has been laid in regards to the Pan American Games,” Mulder said.

In a press conference following the 11-hour session which included Saavedra’s two-hour testimony, Popular Force held a press conference to announce that they would present a motion to impeach the education minister on Friday. The party which controls 71 of Congress’s 130 seats needs a simple majority to impeach.

Columnists and analysts of all political stripes have condemned the impeachment as political opportunism and obstructionism on the part of Popular Force.

“It would be an atrocity to impeach a Cabinet minister whose hands are clean,” Peruvians for Change congressman Gino Costa said.

Others have suggested that Popular Force is being driven by for-profit universities which stand to face tougher educational standards under Peru’s new university reforms which Saavedra championed.

“They want the university mafia kingpins to continue profiting off education,” Broad Front leader Marco Arana said. “All of Peru knows this interrogation had the ultimate aim to impeach him.”

The likely impeachment of education minister Jaime Saavedra comes after Peruvian students showed a marked improvement in their PISA scores, an assessment used by the OECD to rank the quality of education in 65 countries.

In 2012, Peru ranked last among 34 OECD members and 31 non-member countries participating in the PISA assessment. In 2015, Peru improved to 62nd of 69 participating countries, with improved scores in reading, mathematics and science. Peru scored one place behind Brazil and above countries including Lebanon, Kosovo and the Dominican Republic.

If Saavedra is impeached, he will be the second Cabinet minister to leave Kuczynski’s government after defense minister Mariano Gonzalez resigned last week. The defense ministry was taken over by culture minister Jorge Nieto, who was replaced by former actor Salvador de Solar.