Two of Peru’s presidential candidates may be disqualified 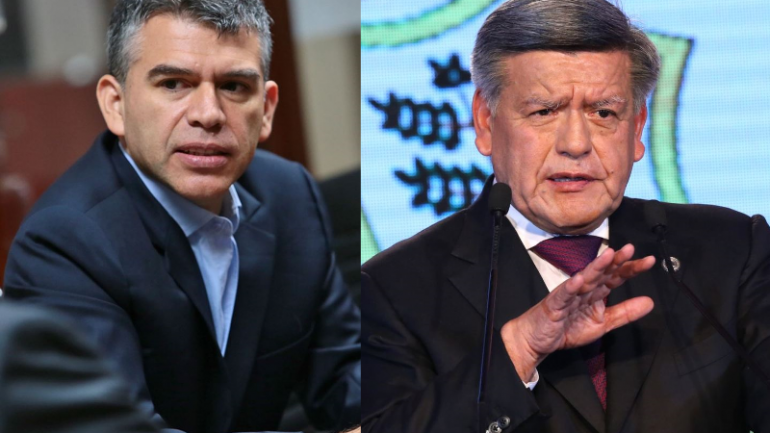 Legal technicalities and procedural errors threaten to bar the candidacies of Julio Guzman and Cesar Acuña from Peru’s 2016 presidential election.

A resolution from Peru’s national electoral board JNE last month which was made public today declared some of Julio Guzman’s Everybody for Peru political party’s procedural requirements invalid. At the same time, Cesar Acuña’s political opponents are trying to disqualify him from the ballot for listing a false home address on official declarations to the electoral authority.

The JNE’s division which regulates Peru’s political parties has nullified official Everybody for Peru actions taken at an extraordinary assembly due to the party’s internal procedural errors. If the party’s convention is not recognized by the electoral authority, its selection of Guzman as the party candidate could be rendered invalid.

“It’s surprising that the very next day after we come in second in the polls, these things are leaked to the press,” Guzman said in a forum at the University of Lima. “There is a black hand here. There are murky intentions.”

According to the resolution, the Everybody for Peru party did not give members enough notice for an extraordinary assembly in which the party’s statutes governing the national committee would be amended. The party announced the Oct. 10 assembly on Sept. 20, one day short of the minimum requirement of 15 working days.

The resolution also detailed that, while 16 of 42 party leaders who attended the assembly would meet a 20% requirement to make quorum, five of the 16 were not registered party members with the JNE.

In addition to invalidating the party’s extraordinary assembly which paved the way for the national committee to select Julio Guzman as its presidential candidate, the JNE resolution also denied the the party’s request to change its official logo from red to purple.

The legal obstacle to Guzman’s candidacy comes less than a week after he placed second in a GfK poll in an election in which Peru’s voters are looking for a candidate from outside the political establishment.

As Guzman wrestles with the JNE over his party’s internal procedures, Alan Garcia’s Popular Alliance of the APRA and Popular Christian Party have mounted a legal attack to disqualify former La Libertad governor Cesar Acuña.

A Popular Alliance attorney filed a motion to bar Acuña from the ballot due to his misrepresenting his place of residence on his official declarations to the JNE. Acuña claimed to reside in impoverished San Juan de Lurigancho district in northern Lima.

However the multimillionaire founder of Cesar Vallejo University lives in Las Casuarinas, one of Surco’s swankiest neighborhoods which made international headlines this year for being separated from the low-income San Juan de Miraflores district by a ten-foot wall topped with barbed wire.

The JNE rejected the motion against Acuña based on the fact that his Alliance for Progress party has not completed its registration of candidates for elections. But it is likely Acuña’s rivals will try to disqualify him again for submitting sworn statements that he resided on an unfinished floor of a building owned by San Juan de Lurigancho mayor Juan Navarro.

In addition to falsifying his address, Acuña could be removed from the ballot stemming from plagiarism in his doctoral thesis. JNE sources have said that if the Complutense University of Madrid revokes Acuña’s degree, he could be found ineligible for submitting a false resume. Since the scandal broke over Acuña’s doctoral thesis, investigators have detected further plagiarism in his master’s thesis for the University of Lima.

In addition to the technicalities which could derail Acuña’s candidacy, a growing number of columnists have called for the candidate to resign given the plagiarism scandals and his use of university resources for political advertisements.

The latest polls show that Guzman and Acuña are in a statistical tie with Pedro Pablo Kuczynski for second place to frontrunner Keiko Fujimori. General elections are scheduled for April 10.