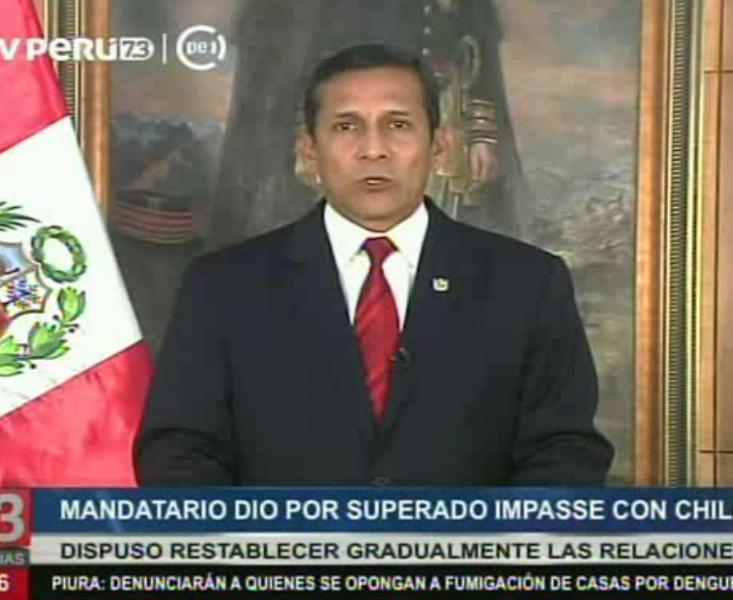 President Ollanta Humala said in a speech yesterday that Chile’s espionage against Peru had been forgiven and the two countries would restore diplomatic relations.

Humala said Chilean President Michelle Bachelet had given a satisfactory explanation and affirmed that her government would not sponsor any further espionage against Peru. Humala’s speech also underscored the importance of working together and strengthening ties with Chile to further both countries’ economic development.

“I am convinced that having made a firm and patriotic stand in defense of national interests combined with the high value that Peru places on relations with its neighboring states have allowed us to solidify a satisfactory solution to the current situation,” Humala said in a speech broadcast on national television.

Fernando Rojas, Peru’s ambassador to Chile, will return to Santiago on Thursday to resume his duties. “I am very pleased and it is an enormous responsibility to continue our phase of promoting integration and cooperation between our two neighboring countries,” Rojas told Andina.

In February three officials in Peru’s navy were charged with espionage for providing Chile with information between 2005 and 2012. Both countries recalled their ambassadors in what became a politically tense situation. In March Chile admitted to the espionage.

According to an Ipsos public opinion poll from March, 62% of Peruvians believed the political tensions were an attempt by the Peruvian government to distract attention from domestic problems including corruption scandals in Humala’s Nationalist Party, an economic slowdown and rising crime rates. 44% considered Humala’s reaction to the espionage as “exaggerated” while 42% thought it was appropriate. Only 18% of Peruvians supported ruling party congressman Daniel Abugattas’ proposal of reducing economic ties with Chile.