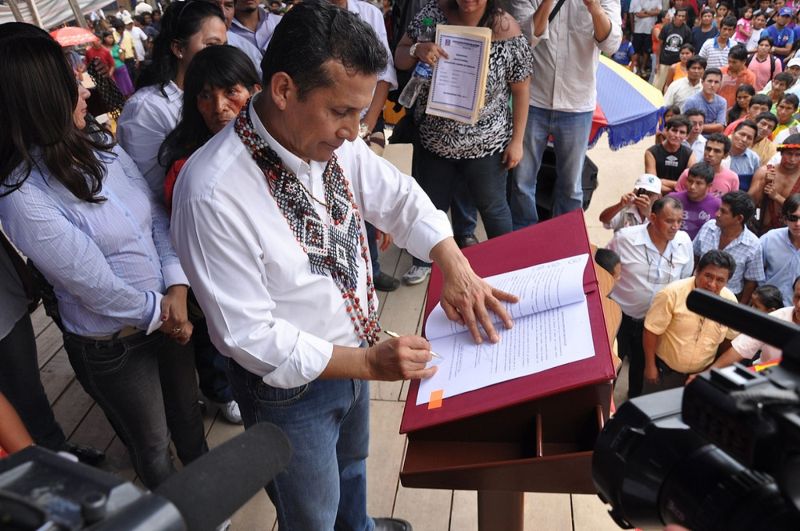 President Ollanta Humala signed a decree to raise Peru’s monthly minimum wage from $223 to $253 on Wednesday.

Humala announced the 13% increase today at an event in the southern state of Puno. The $30 hike is Humala’s third after increases in 2011 and 2012 boosted the monthly minimum wage by $45, bringing the total increase to 42% during his presidency.

“When we grow the distribution is also for everybody,” Humala said. “That is what I have come to tell you. We are increasing the minimum living wage by 100 soles, to 850 soles, so this improves for everybody.”

Humala added that his government increased the minimum wage more than the previous two governments led by Alejandro Toledo and Alan Garcia combined. He also urged voters to demand that the 2016 presidential candidates declare their plans for Humala’s scholarship, school lunch and pension programs.

“This adjustment … took technical factors such as inflation and productivity into account so that the increase reflects the economic performance of our country and contributes to improving the purchasing power of workers,” reads a statement from the labor ministry. “Moreover, this provision will not affect the production system in being progressive as well as an updating measure realized after increases in inflation and productivity had occurred.”

However University of the Pacific economics dean Juan Mendoza told El Comercio that hiking Peru’s minimum wage right now is a populist ploy. He says that only 2% of Peru’s working adults are employed in formal jobs earning the minimum wage. While the labor ministry said that 650,000 workers would benefit, Mendoza believes the true figure is below 200,000. Mendoza added that the increase will encourage informality in a country where only one out of four workers is formally employed.

However Carmela Siguentes, president of Peru’s largest labor union, CGTP, told El Comercio that this minimum wage increase should have come years ago.

“Even with the increase, the minimum wage in Peru remains one of the lowest in the region,” Siguentes said. “We believe it should be $386 and we expect the next government to decide on another increase.”

Peru’s new minimum wage is lower than that of Argentina and Chile, but higher than in Brazil and Colombia.

Some have questioned the timing of Humala’s decree, just 11 days from 2016 general elections.

“This is a political ploy,” Jorge Gonzalez, University of the Pacific economist and former foreign minister under President Alberto Fujimori, told El Comercio. “The government is three months from leaving and it is not their role to raise the minimum wage, which is a task for the next president.”

Humala had mentioned a possible increase in the minimum wage in recent interviews, and former labor minister Fredy Otarola signaled a probable hike as far back as February 2015.

“It seems fabulous to me that the president has raised the minimum wage,” presidential candidate Pedro Pablo Kuczynski, whose government plan included raising the rate to $253, said in an interview with Gestion. “What matters is that a complete package is implemented and not just one part.”

Kuczynski added that his campaign would evaluate raising the minimum wage to $282.

The new minimum wage takes effect on May 1. Peru’s general elections are scheduled for April 10, with a runoff vote for the top two presidential candidates on June 5.